Timberline is located near the top of Oregon’s tallest mountain, Mount Hood - a towering 11,245-foot volcano. The ski resort is known for two things: its summer skiing and the beautiful, historical lodge. A Mount Hood-icon and one of Oregon’s most popular tourist attractions, it was declared a National Historic Landmark in 1977. Funded by President Franklin Roosevelt’s Work Progress Administration (WPA), the Depression-era project was completed in just over a year, between June 1936 and September 1937. The 55,000-square building made of lumber and iron is basically a snow fortress.

Timberline was the very first ski resort in the U.S. to offer lift-served summer skiing. It’s also the only ski resort in the country to be open 12 months a year.  Every summer, over 50,000 skiers make the journey (even though the summers of the Pacific Northwest can bring clouds and rain). Much thanks to the Palmer Express, a high-speed quad, which takes guests up to 8,450 feet. The Magic Mile Super Express also goes to the top of the Palmer Snowfield. It’s worth noting that the original Magic Mile lift was the second ski lift to be built in the U.S. (Sun Valley installed the very first chairlift). Need to make room for one or two World Cup ski racers? They’re most likely heading up to Palmer to get some practice runs in. During summertime, Timberline is also a hub for summer camps, with every kind of level and skier represented. But don’t overlook coming here in spring as you can be blessed with high-altitude sunshine and powder.

During wintertime, when visitors to other resorts in the state, such as Meadows and Skibowl, have to change ski for rain gear, it’s almost always falling white gold off the skies above Timberline. Naturally, the greatest vertical drop in the U.S. Pacific Northwest, 3,690 vertical feet from Palmier Glacier to the bottom Still Creek Basin will be brimming with pow. 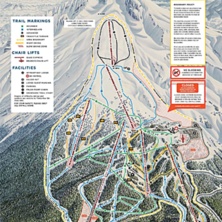