Ernest Hemingway was here in 1925. Low prices and great views gave him inspiration for his writing. However, back then there was neither ski lifts nor prepared pistes, completely different from what the ski resort at Silvretta Montafon offers today.

Silvretta Montafon is located in western Austria and many say it’s a fairly inexpensive place, at least compared to St Anton and Lech. Montafon is a perfect destination for moderate skiers, with only one black piste at Silvretta Nova. The most attractive aspect about this place is perhaps the large off-piste areas, which means ski touring has become popular here.

Silvretta Nova is hugely popular among holiday makers from Germany and Switzerland, and it may be a good idea to come here outside these countries typical holiday periods.

The best way to reach Silvretta Nova is by car or bus from Zürich airport.
There are many great restaurants in Silvretta Nova and you can also visit Europe’s largest ski bar here.
Silvretta Montafon - Nova includes the ski resorts Hochjoch-Schruns

Janne (Guest)
Note! This text has been translated by Google Translate.
Show original

The best place for free riders looking for powder without the effort!

Wolmsten (Guest)
Note! This text has been translated by Google Translate.
Show original

There were four ski days in January 2019.
Had three good ski days out of five.
Accommodation in Schrums. Top trip on Schwarzköpfle mm.
Found a really good lift near off-piste skiing in Gargellen on the last day. :-)

Very good off-piste that doesn't get run as fast as the big brothers Ischgl and St. Anton. Genuine alpine environment with varied skiing. There is something for everyone in the Montafon.

Georg66
Note! This text has been translated by Google Translate.
Show original

Montafon in Austria is a large and scattered area with a lot of interesting slopes and good opportunities for nice off-piste. When we were there we stayed in Gaschurn and took the ski bus to the slopes in the mornings which worked well. The weather was varied and most overcast, but one day it was brilliant sun and then we went with a guide. If you are prepared to go for a couple of hours on the shallow paddocks, there is very good off-piste. Both very steep and very buttery depending on what you want. The slopes in Silvretta did not really come into their own when the visibility was very limited. Just in the village of Gaschurn there was no nightlife at all, but below the lifts one could after-ski before jumping on the bus to the hotel and finishing the evening early. Which in itself was good if you wanted with the early ski bus to the slopes.

Cristoffer (Guest)
Note! This text has been translated by Google Translate.
Show original

Per (Guest)
Note! This text has been translated by Google Translate.
Show original

Contains many of the previous reviews.
The valley is sleepy in the evenings. And the ride is of varying type, something for everyone, therefore.
Can otherwise recommend renting a guide and taking the trip
Starting from Gargellen with hiking and off-piste skiing that finally takes you to Klosters in Switzerland and from there hiking and offpiste back to Gargellen. Very good ride at good snow access. There is also an easy trip further into the valley of the village of Partenen where you get up by lift and something called tunnel taxi to silvrettasee and piz buin and on to the village of Galtür which lies furthest into the valley at Ichgl (excuse spelling maybe) and then back down the Montafon valley.
Have spent a lot of time in the valley since the first time in 1986. Have been 2 weeks in the valley every year since then, so a little over 50 weeks in the valley has made it a second home. Which has resulted in a fairly good insight into what is happening in the valley and what is going on. The slow-lift lift system meant that there was a problem in some places, especially on the mountain hoch joch now belonging to Silver Nova, and nowadays, it is also built together with a lift down the valley where Valisera valley station is located. The work is with new lifts on the way ahead all the time.

Henning (Guest)
Note! This text has been translated by Google Translate.
Show original

Spent seven ski days in the area of ​​February / March 2014 with a polar. Falling heights are not huge but we found several beautiful runs both inside and outside the piste. Really no congestion hill, longest waiting time at the falls was 10 minutes a Sunday morning. The areas had not received any snow for a while, but it was easy to find untouched lots if you were in a hurry. We seemed to be the ones in the valley who at all hurried to get beyond what was reached by the lifts. Great potential for fine walks in the (forest) forest if there is snow there, which it did not last year.

In addition to a bus ride from Västerås, we were alone Swedes in the area. Note that week 9 is a sports permit in Holland and Montafon seems to be one of their favorite places. Just as others have mentioned, it's still dead in the evenings. Little locals who hang out on the weekend, otherwise nothing anywhere in the valley.

Petter (Guest)
Note! This text has been translated by Google Translate.
Show original

Visited the area a dozen times, very good area when you get to know it. Good range of slopes and offpiste and snow proof!

Snomolnet
Note! This text has been translated by Google Translate.
Show original

Montafon Valley: "The Alps' Family-Friendly Valley"
Review on the whole valley, not just Silvretta nova.
Made three months in the Montafon Valley 2009. The lift pass applies to Silvretta Nova, Golm, Hochjoch and Gargellen + a small lift that you do not use.
Have previously made seasons in Fugen (Zillertal) and St.Anton.

queues:
Non-existent. Is there a little 15 min at the valley station in Silvretta nova or at the cabin in Hochjoch.

Park:
Is not jibber so I can judge it I did not see what I tested.
There is a large park in Silvretta nova that seems ok. Very kids that seem to be fine.
Bad / nonexistent parks in the other parts.

Slopes:
Gargellen: Few and bad
Silvretta nova: A lot of good slopes.
Golm: Cozy hill down, or else there is not much here.
Hochjoch: One or two good, the rest is not much to hang in the Christmas tree.

Off-piste:
Gargellen: There are large areas and very good skiing. There are also soft randonne tours going on here.
There are untouched lines a few days after a snowfall. Worth thinking about is that they close Tähli (offpist valley) after snowfall and do not let go until it's stable (Think they're iaf).

Silvretta nova: Best forest skiing in the valley that you can go without playing with the police. There is also some good longer off-piste. Bla can go down the Gargellen road in the valley's best yard.
There are also great areas that are quickly picked up. Best area if you want something that suits everyone.

Golm:
Here, it's a good idea to play a game with the police (ride in a valley not allowed to go in) with a fine as a penalty. Otherwise you can go a little and get untouched snow one week after snowfall. The place you go to when there is no untouched loose snow in the north, somewhere else.

Hochjoch:
There is some good ride. Unfortunately, slow lanes and policemen in the forest destroy much of the pleasure. Some locals favorite according to themselves. Then you will see them more often in Gargellen or Silvretta nova. The hunch about this resort was one of the reasoning that you went here, but the area did not impress. Still posing the question. What have we missed?

Nightlife:
St-Gallenkirsh which is the tourist resort in the valley has ok nightlife some days. There is also a après ski place and a few bars in Schruns. But it is easily the sleepiest place I've been seasoned / been on.

accommodation:
Stayed in St. Anton im Montafon. Incredibly sleepy.
The biggest reason for the party is that the montafon valley can never be a seasonal place to expect.
There is a lot of accommodation, but those renting out are not used to renting more than a week and they are totally strange to give rabbit if they live longer. This means that there is not much affordable accommodation in the valley.

Conclusion:
For those who want a lot of snow for themselves and who do not mind sitting at home and staring at the wall in the evenings. The quality of the offpiste is ok and the biggest advantage is that there is little competition for the snow.
In 2009 there were a maximum of 20 seasoners in the valley. 4 Swedes, 4 Spaniards, one German couple and 5-6 Norwegians (who disappeared in February).
May see when and if I come back.
Is definitely not impossible, but never more season here it's safe for sure.

EricS-700
Note! This text has been translated by Google Translate.
Show original

Have had a lot of pillows both times I was there, thought it was very good. Easy to find untouched pads. Got a lot of long pillowcases in Silveretta Nova. Beautiful slopes and good gulasch in the back too :) 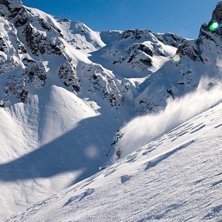 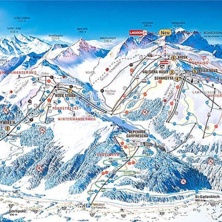