Sugar Bowl is one of California’s oldest ski resorts, whose history includes the likes of Walt Disney, Old Hollywood (Errol Flynn and Greta Garbo) and a bit of Austrian ski culture. Sitting on top of Donner Summit, within the Tahoe Basin, it’s said to have been the resort that catapulted skiing throughout the Sierra mountains.

Donner summit got its name after the settlers who became snowed in during the winter of 1846-47. Perhaps not surprising considering this is the sweet spot where heavy storms off the Pacific Ocean hit the mountains in full force. With 500 inches of annual snowfall, Sugar Bowl has one of the highest snowfall totals in the area. Among locals, the resort’s white gold is the stuff of legends and reason enough to return winter after winter. Along with almost non-existing lift lines and uncrowded, geneous slopes.

The family-owned resort brought shredding to the sunny state in 1939. Austrian ski racer Hannes Schroll wanted to create a Tyrolean- style ski village. He realized that the snow stays on the mountain, like sugar-coating, all the way to June. There you go, Sugar Bowl. And it became home to California’s very first chairlift, featuring 13 steel towers and 3,200 feet long. The lift was named the Disney Lift, after the one and only Walt Disney, who invested in the ski area. He used to bring his family here for ski vacations and in his “Art of Skiing,” Goofy takes to the slopes of Sugar Bowl. Back then, a ride up cost just a quarter. To get to Sugar Bowl itself, skiers used to take the Transcontinental Railroad but unfortunately, that’s no longer possible.

Today, 82 years later, the ski resort has a total of 12 lifts to access the resort’s four peaks, offering a total of 1,650 acres of skiable terrain and 1,500 vertical feet. But the community feel and Bavarian ski spirit is still ever-present. The vertical drop isn’t huge compared to the other resorts sprinkled around Lake Tahoe but it’s enough to give you an appetizer. Sugar Bowl also has some of the finest backcountry skiing in the region. Skiers can traverse the Sierra Crest, a ridgeline that runs north to south.

If you’re skiing in-bound, the Lincoln Express takes skiers to an elevation of 8,383 on top of Mount Lincoln for steep, thrilling runs. Crow’s Peak Chair, on the other hand, drops you among tall trees and expert terrain on the west side. Most of the black and double-black terrain can be found between the Disney and Lincoln peaks. 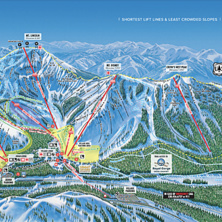