While visitors to the Pacific Northwest have heard rumors of alpine sports outside the Cascade Mountain range, winter venues like the Ski Bluewood resort prove it. Found in the Blue Mountains in southeastern Washington state, the ski area has provided skiing and snowboarding since 1980. Current ownership has a three-phase expansion plan well underway, designed to improve guest experiences on and off the pow, including snowmaking equipment.

Interstate travel along I-84 in northern Oregon or I-82 in Kennewick, Washington, will get motorists into the area. Using US Route 12 to reach Walla Walla or Dayton brings vehicles to the local roadway that leads to the resort. The closest International airport is in Portland, Oregon, over 250 miles west of here. Several domestic airfields are closer, including the Walla Walla Regional Airport.

The resort at Ski Bluewood initially started with planning in the 1960s and was built during the following decade. Since opening its doors in January 1980, it has grown to offer guests hundreds of acres that guests can alpine ski or ride. Local park rats proudly boast to visitors that the ski area produces all of the energy it consumes on-site. It is one of the few winter venues to generate 100-percent of its electrical power from diesel generators located in the lodge's basement and near the main lift.

Average annual snowfall amounts reach 300 inches at Ski Bluewood, allowing ski bums to enjoy the slopes between December and March in most years. The resort provides the basics at the day lodge and yurts. Base 4545 provides retail souvenirs and those things that visitors forget to bring, while the rental and repair shop gets everyone's gear in shape or provides it those ski bums traveling light. Ski Bluewood also has lessons for all skill levels through the SnowSports Center (skiing and riding instruction in private/semi-private/group settings) broken down into age groups (under 6/7 to 12/13 and older).

The base elevation at Ski Bluewood rests at 4,545 feet, and the summit stands at 5,670 feet. Its 1,125-foot vertical rise offers enough potentials to keep everyone's interest, no matter what their skiing or riding ability might be. There are 24 runs to choose from at this winter venue, with just under half of the mountain (45-percent) rating at blue for skiers and snowboarders with experience. The remaining terrain breaks down into 25-percent ratings of green for newbies, while 30-percent of the runs ranked as a black diamond for advanced alpine fun in the pow.

Ski Bluewood does not offer uphill access or Nordic skiing facilities at the moment. There are three areas on the mountain that the Bluewood staff designates as freestyle terrain, but keep in mind that these might not change much over the season as the facility does not have snowmaking equipment to supplement features. Two triple chairs and two conveyor belts can move over 6,200 Bluewood visitors uphill each hour. 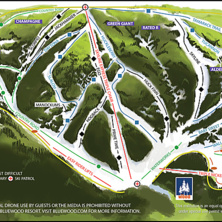