olano85
Note! This text has been translated by Google Translate.
Show original

I was in Telluride two weeks February 2011, it felt like a long time for this cozy place.
As it is more remote and difficult to access than for example. Aspen and Vail, there were even fewer people. It was often felt that in principle it had the back for itself, and to the offpiste it was never far. A lift up, 10-30 min hike and then you were there! For us Swedes it was also a fairly cheap place for everything; gadgets, food and accommodation. Especially when the dollar was low (6.7).
The only negative was that the people in the age of 20-30 were not so many and that the nightlife was relatively quiet and the places (pubs and restaurants) easily counted. By the way, a terrific place that has a lot to offer!

Henke B (Guest)
Note! This text has been translated by Google Translate.
Show original

Visited Telluride for the first time 98 and last summer. Also be there 2 weeks in winter 2008. A really cozy city that keeps high std on good and bad. Part of the "Wild West" feel has been preserved despite the fact that today it is an exclusive place. The ski slope has been developed in recent years with a large off-piste area up to Palmyra Peak which is today within the ski area. This means that in good snow conditions you have good offpiste opportunities in the ski area. Big parts of this have to be hesitated. (the pistemap is not updated here at Freeride) Fully possible to combine with a visit to Silverton as it is 1-2 hours drive away due to snow conditions. Great scenery with a city that really lies at the end of the road. The lift passes start approaching 100 usd / day so cheap it will not be.

Svedje
Note! This text has been translated by Google Translate.
Show original

There is a super cozy hotel in Rico, about 45 min south of the T-ride where you get a great breakfast, plus it's much cheaper to stay here than in the T-ride. We saw two wolves when we were there last year in March. Large area, relatively steep, funeral if there has been a little snow "fluff". Cozy city. A little gem not far from Crested Butte about 3.5 hours by car. We had season passes for Taos $ 450 which lasted for 70 days (including 3dgr in T-ride) o we skid 14 dgr about 32 dollars a day.

Olle_S
Note! This text has been translated by Google Translate.
Show original

My favorite in Colorado (of those I've been in). Located more difficult than the Vail & gang, which gives a more relaxed feeling and less people. Incredible offpiste opportunities with lift up and finish in the village. Nice town with genuine wild-western buildings. Can you imagine staying 45min-1h from Telluride you can find hotels with 40% discount on lift cards, good deal when the lift passes around $ 75 / day (04/05). 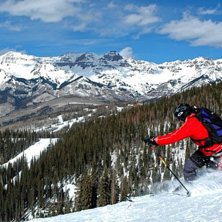