9-days snow forecast from Trillevallen
What do you think about Trillevallen?
Write a review
5
4
3
2
1
3.9
11 reviews

Barrabella
Note! This text has been translated by Google Translate.
Show original

Awesome place to spend a mountain stay at.
Was there at a conference and they had stitched the package together in a great way. Fun to run top trip on well list and down the back. Very nice skiing there!
Highly recommend the hotel!

Olof (Guest)
Note! This text has been translated by Google Translate.
Show original

Danil
Note! This text has been translated by Google Translate.
Show original

Have been there a few times and was there now by the end of February and had heard that it would be a good place for Trillevallen. However, it did not meet my expectations.
First of all, you expect all lifts to be open at the end of February, they were not. 3 out of 10 lifts stood still for unknown reason, blown it was not at all when the new seat lift was running. Park does NOT exist either, which is a very big minus.
The ride that it was offered was actually quite good! The backs are not lifted and lift queues do not exist. The backs were also quite beginner-friendly as my two smaller cousins, who never did before, could go from barely able to go to anchorage itself for the rest of the system.

The ski area is not particularly big, it says there are ten lifts, so you can count down five pieces that are child lifts and transport lifts. You get tired of the slopes, which are a bit lonely even though they are good! The new chairlift is a big lift for a plant of this size and makes the ski area a bit more 'worthy'. Most of the lifts are kind of eighties (which may be a reason they stood still) but this gives me some kind of nice charming feeling.
Do not know how food etc. is at the hotel, by the way, is the only place to eat in addition to the new back restaurant, which is nice, firm own coffee is recommended as the bakery there was dry and tasteless.

-No park !!
-Korta backs
- When the lifts are still standing
- Less than it looks on the pistemap
-All lifts on the same side of the mountain = do not always read

In short, a good place for day trips and for those who want to try something new but no place I would spend a week on.

skavet
Note! This text has been translated by Google Translate.
Show original

I think the roller coaster is a cannon!

No lift queues, really good pistaches even though it's two in the afternoon. But the best of all is the offpiste possibilities. They are really good because there are so few people who go there with it, they will not get up quickly. You do not have to go all the way to the national border and rent a helicopter or cross over to the back of the river. Trillevallen is the shit I must only say!

Obviously, the old man who owned the roller coaster has gone away and now the family will have the family who take over the betting rock hard on the rollercoaster. The hotel will be renovated and you will invest 200 million in two years to set up new lifts and other. The thing is that the roller coaster will always be in the shade of the ears and there will never be as many people in the slopes as it is there.

Then if you want to go for a night, taxi costs a $ 500, no matter what it may cost at times. There are also some beautiful afterski places where the bear valley, which is a bit from the hill, has good prices and good staff. They provide good service and if you need something they fix them.

Hope you are taking you here because you want to be where it happens.

Olle (Guest)
Note! This text has been translated by Google Translate.
Show original

My 4th year old daughter had to plaster his leg four days before we went to Trillevallen, and we had not canceled a cancellation policy. But super friendly Andrea at the high-rise hotel still canceled our room! Snack about service!
As soon as we can, we will go to Trillevallen, just to support these incredibly friendly people!

Trillevallen is the true winter paradise. For many years we have drawn to Åre, Tege, Duved, Storlien and most in Stöten / Sälen. All of them are top places but Trillevallen with its non-existent lift queues under the law, many good and varied downsides, good children's area, incredibly nice staff in the dining room, ski shop etc (you did not get the money back without a doctor's certificate, you can try the same elsewhere, you'll get the same message wherever you go skiing). Of course, you do not have a seat lift (as they promised in the last 10 years ...) but it goes well anyway. That the ski pass costs almost only half of Åres does not matter. Yes, and if you want to get in Åre, it's half an hour's drive there.

per (Guest)
Note! This text has been translated by Google Translate.
Show original

Previously, I always bought a weekly card in Trillevallen. One week, the whole family had a stomach ache after two or three days. I made a personal visit to explain that we wanted the remainder of the weekly card back in money, so I was required to receive a medical certificate. They apparently meant we would go to five people with diarrhea to Järpen instead of believing my words!
Never again Trillevallen since such a customer meeting!

Will spend a week there up every winter
, have never encountered enough hope when I've been there but on the other hand, there are no people in the slopes and the evil lift queue! SO, I'm just going.

little people ... really nice offpiste! Sometimes there is usually a hangover just the short-term hill, throwing a 2-2.5 meter high drop. Really nice! if there is a lot of snow then the place is wonderful

This place is in the shadow of Åre.
and it actually does a lot, people's space is a word that can describe the slopes.
But it's not bad.
There are some soft joints in the slopes and natural jumps can be found here and there.
True, Funpark does not exist, neither is there another good jump place, there are jumps deployed and one of the dullest ski crossroads I went.
For nice skiers, everything goes well, because offpiste riders do it but for jibbers it's nothing further.
In short, a place where nothing stands out but it's not bad either. 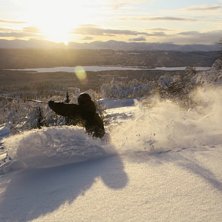 Trillevallen is closed for the season.