Jonas (Guest)
Nice villages w good food and nice staff. Really good forest skiing. Sestriere one of the ugliest alp villages we’ve visited. Ski system, Via Lattea, disaster. System under dimensioned for the number of people in the area. Haven’t seen such old lifts in ages. Super unfriendly and rude staff. Ski system closes down if the winds get just above average. Don’t know if it’s because the lifts are so bad or if the staff is just lazy and want to leave early. We will never return.

Sara1979
Note! This text has been translated by Google Translate.
Show original

Spent 3 months in Sauze d'Oulx 2006. Nice town with an old and newer part. Total invasion of English, which was unknown to you on the slopes. Which would say that 70% of people on the slope could not ski, mostly. The narrowest passage in the Sauze system was called the English Channel, because all the English and South Africans lay there. Never have I seen the pistons pop out as often as here !!!

BUT, there is a plus with this. The English are concentrated to the sauze area, which means that the remaining system is almost empty! The off-piste is long here, nobody is leaving outside. You can find lots of nice forest skiing in Sauze and down to the neighboring town of Jouvencaeux.

The best slopes are found in Sansicario where you will be lyrical on their new Salomone street races. Fantastic slopes, piste No. 21 is a must.

Furthermore, one can say that Sestrier is not so bad either. Borgata area offers good slope on the slopes and nice offpiste. The good offpiste stretch is to go to the highest point in the Borgata area, which is to the far right to Sestrier town. Then you settle down, on the right side of the river ... which is left. Here lies the snow untouched for a long time!
Good distance is also to take Fraiteve lift in Sestrier and slope a bit to the right of the lift, where you will also find good off-piste.

Montgenevre and Cesana are other places in the system that are quite commonplace. If you go to Sauze and Vialattea, concentrate on San Sicario and Sestrier.

Night life is on top when a lot of full English people in group can be quite so festive ...
Try Vagabondis, best mix on people!
The food is the best in the village.

Vialetta is a fairly varied system that is generally aimed at the family skier, but the gold grain is available. I'm going to say that I was there last week of January 2005 and it was half-dull with snow, it could have affected my impression. Stayed in Sauze D'oulx so we start.

Sauze D'oulx located on one edge of Vialetta is a British retreat and then you may understand that the slopes are quite nice, nothing wrong with the British mood on the other hand. Family-friendly it's iaf. A common sense, like most expressions after a day in the slopes of Sauze, is their unevenness in slope. Was very very steep, flat, steep, flat, etc.
Really good with pubs and resturants on the hill it's iaf., Could have done with the British skiing ...

Between Sauze and Sestriere there is a high speed cab lift, taking approx. 20min to go between the systems.

Sestriere, which is the most famous part of the Vialetta system thanks to its slalom competitions, has a good flow in the slopes, but half of them are quite flat and family-friendly. Sestriere is better than Sauze but missing, what I think, quantity. But it's not far to Sauze so you can live with that.
Then you have the resturang at the bottom which has a staff of nice Swedes (the owner is married to a Swedish), very nice.

The third and last part I tested is "Montgenevre" and is on the other side of the system compared to Sauze. Here you can talk about skiing! When you've got a bit in the French Alps (you read right, France), it's more or less calvary and the only thing that can stop you is lactic acid in your legs! Montgenevre has both huge areas of offpiste and good, tight, steep, long runs. Clearly the best part of Vialetta. Is it somewhere in the Vialetta system I would go back to this is it.

My rating of Vialetta is very clever. The system is really well-run with Montgenevre but is quite nice in general. A third gets it iaf., With 4+ for the Montgenevre part.

Vialattea is a cohesive ski system across the Susa valley, located east of the city of Turin in Italy against the French border. The ski system consists of 4 + 1 system with four Italian (Sestriere, Sauze d'Oulx, Sansicario, Claviere) and a French (Montgenevre).

If you go here, you have great opportunities for varied driving, ranging from family-friendly driving to more extreme driving. Families find opportunities at all locations as overpowering slopes are red and down at most resorts and yet special children's areas. The more technical fields can also be satisfied, but it requires a bit more drive outside the piste that you often have for yourself, since I have realized that there is not very much skidbummer around some of the ski systems. So a plus in the edge is just this, which makes it possible for you to do many rides entirely for yourself if you are out early.

From an economic point of view, it may also be interesting to look around among the systems as prices differ from the more expensive and known to them more unknown. Buying a card for the whole system I do not recommend for day passes or the like, but requires that you stay longer.

Access to vehicles can help a lot when you can move between them. This also allows you to travel to other areas around both the French and Italian sides, yet very nice offpistberg in the valley, completely outside the systems of yours who have that knowledge.

For more specific questions, please contact me and my rating is based on the fact that it will be 4- if you only look for ski systems directly and 4+ for the possibilities for your own ride. I put a general grade across the range of rides, food, accommodation, etc. 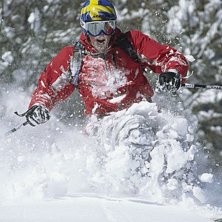 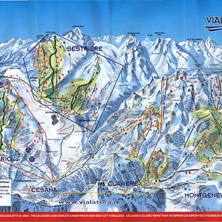