Due to all the grizzlies in the area, Bear Valley was first named Grizzly Bear Valley. The name came about during a 1855 scouting expedition. There’s not such an abundance of North American brown bears anymore sadly but skiers can find plenty to rejoice about. Bear Valley is not one of the biggest ski resorts nor the glitziest, in fact it’s quite underrated.

Still, with 1,680 acres of downhill skiing, the resort has a lot going for it. For one, the runs sport unbroken vistas of the surrounding, breath-takingly gorgeous mountain landscape. Secondly, it’s one of the areas in California that receives the heaviest snowfall. Thirdly, there’s no lift lines or hassle or show-off. C’mon, that’s hard to beat. Freestylers have two progressive terrain parks to choose from. Intermediate skiers tend to head to the upper elevations while advanced skiers, in search of the good stuff, aim for Grizzly Bowl and Snow Valley.

California’s Bear Valley sits on top of Ebbetts Pass, at 7,200 feet, in the midst of the pristine Stanislaus National Forest, between Lake Tahoe and Yosemite. High in the Sierra, it’s in Alpine County, which happens to be California’s least populated county with around 1,200 inhabitants.

Because it’s certainly not the easiest resort to find, rather it’s off-the-grid. This despite the resort, perhaps surprisingly, being the closest major ski area to the Bay Area. At about 180 miles east of the South Bay, it’s a roughly three-hour drive. But you can also get here by four wheels from San Diego, Los Angeles and Orange County. Begin your journey at Lake Tahoe, head south along the Sierra, and look for that tiny spot named Bear Valley. During winter, California State Route 4 just kind of ends here.

Bear Valley-loyalists (many returning year after year for the lift-accessed backcountry terrain) know where to go though, almost heading back to a time when skiing was simpler and cheaper. Bear Valley Ski Resort opened as Mount Reba Ski Bowl in 1967. In the early 1970s, it was regarded as the crème de la crème when it came to ski destinations. In 1991, the resort changed its name to the current Bear Valley Mountain Resort.

Of course, there’s no Sunday morning-rush to speak off. If you’re travelling to the Bay Area, regulars suggest taking State 99 south-bound, then State 120 heading west to avoid the worst of the Sunday San Francisco gridlock. 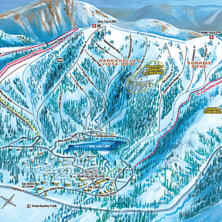