Owned by Vail Resorts, Heavenly is Lake Tahoe’s premier ski resort, an all-rounder known for its impressive inter-state ski area and its glamorous nightlife. As the biggest ski resort in the area, it can also tick off the longest vertical drop, the highest peak and some pretty awesome terrain parks.

Heavenly got its name both after its divine snow and its epic views. Situated in the small town of South Lake Tahoe, at the south-eastern end of Lake Tahoe, its killer views include the alpine lake in all its splendor and the high desert Carson Valley, across the California-Nevada border. On some pistes, such as expert-rated Gunbarrel (1,600 feet of moguls), you might get the impression that you’re literally skiing on the lake. The scenery is often ranked as some of the best in the world. You’ll be going through naturally created hallways of fresh powder in an area where the ocean and heaven meet. Not that you necessarily choose a ski resort just because of its incredible views but it certainly doesn’t hurt.

Another advantage of being located on the border is that the wooded slopes (old-growth forests) cross the two states, so you can easily do a sunny side up breakfast run on the California side and then head across to Nevada after lunch.

Its relative closeness to the Pacific Ocean translates into impressive dumps on these Sierra Nevada mountains, year after year. And for those few exemptions when Mother Nature isn’t up to par, the ski resort has a huge artillery of snowmaking equipment to help things along, which covers 75 percent of the mountain. Heavenly boasts 300 days of sunshine, and great visibility, a year.

The terrain — 4,800 variable acres incorporating two states — it’s definitely vast and varied featuring cragged steeps, cruising runs and bountiful bowls. The ungroomed Killebrew and Mott Canyons, on the Nevada side, offer tons of rad tree skiing and double-diamond class chutes. Experienced skiers also won’t want to miss the mighty mogul runs, heading down to California Lodge (which once was the resort’s original mountain base area).. Heavenly has the highest elevation of any ski resort in the Lake Tahoe Basin, 10,067 feet, the Sky Express will take you there.

Let’s return for a moment to Gunbarrel. U.S. National Ski Hall of Famer Glen Plake, with his never-to-be-replicted dyed Mohawk, grew up in Lake Tahoe, shredding no other than Heavenly. The Gunbarrel held a special place so he began Gunbarrel 25, an annual mogul skiing contest with the goal of doing as many laps as possible during one day. Even if you skip on the hair dye, do at least one run down Gunbarrel.
Heavenly belong to Lake Tahoe.

klarar
Note! This text has been translated by Google Translate.

Unfortunately, here when it was not so snowy AND I was young and inexperienced and had changed my bindings so that I mostly sat on my hedge (: P) but ... Read more (41 words)

Hallvar
Note! This text has been translated by Google Translate.

Heavenly is beautifully located on Lake Tahoe's beach and is divided between the states of California and Nevada, which is illustrated in a comic way ... Read more (277 words)

Virro
Note! This text has been translated by Google Translate.

Heavenly Valley is a really good ski resort with many varied slopes, nice offpiste and a lot of snow! I found 3-4 parks of different kinds, both for ... Read more (95 words) 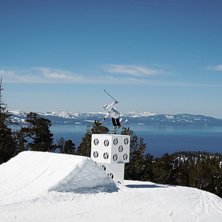 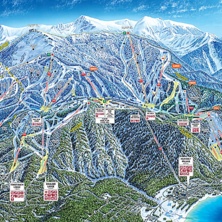