Ajay
Note! This text has been translated by Google Translate.
Show original

.... must agree with the Norwegian! Up at the Lone peak there are a couple of really good rides. Thanks to the Lone peak lifts, you boast that you have the highest (highest elevation) skiing in America and may be true. and it must also be true that at the top you can get really good snowshoeing, as well as in the challenger area .... Much like Swedish and above all Europe, I'm NOT impressed.

The place is in size with Åre, though still smaller. For example, taking 2 lifts takes you from right to left on the pistemap. Then you get tired of how they count on pistes. As soon as a piste breaks, it's considered two slopes, even if they get together 5 meters later. So the number of slopes you can easily halve to get a more reasonable measure.

Well, Americans should be better! Certainly, they are world champions in the number of hot tubs but that was not because I went there!

The idea of ​​building a lift up at "the very top" and only allowing qualified riders to go there like me so therefore they get an "okay" rating anyway.

Mostly the whole plant is terribly bad, except for the Lone peak itself. The terrain you can access with the Lone peak tram is very good - steep and without trees. Right high mountain thus. The elevator Challenger also provides useful terrain.
The rest of the mountain is absolutely incredible slaughter. There are both green, blue and black hills, but everyone is as dull and flat, regardless of color marking. Complete uninteresting ski string. 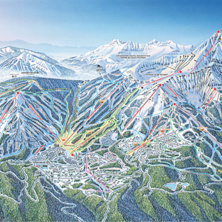