Sitting on the Western slope of the rugged Tetons in Alta, Wyoming, the Grand Targhee Resort is somewhat of a hidden gem, often overlooked. That’s despite its generous offerings of light powder snow (over 500 inches annually) and welcomed lack of lift lines (there are five but who’s counting anyways?). In this part of the world, it’s all about skiing --- all those worldly matters, Grand Targhee leaves for the remaining non-shredders to deal with. Plus the laid-back, welcoming atmosphere will make you feel like you never left, even if it’s your first time here.

The slightly over 2,600 acres of skiable terrain, and 98 trails, are uncrowded. This is a powder skier’s dream waiting to be explored: wide-open glades (such as at Blackfoot), playful gullies and sweeping, immaculate groomers (Sacajawea and Dreamcatcher) and hair-raising steeps (for example, Peaked). Sacajawea can always be trusted to mix things up, featuring trees and glades. On your way down to base, maybe you’ll want to take on Das Boat, steep and with clif bands galore.

Left of the Sacajawea Lift (better keep your tongue and directions straight for this one), there’s a challenge awaiting over the cliff band ...

On one of those glorious, sunny days when there’s literally no better place that you could be, take Dreamcatcher Lift right to the top for the most spectacular view of the Tetons.

A couple of days after a storm has set, do as the locals do and hike up Mary’s Nipple (a peak tucked in between Peaked and Fred’s). From the summit, enjoy the Tetons up close and personal before taking the powder-filled, tree-lined route back down.

Locals have nicknamed Targhee “Grand Foggy” because when the low clouds roll in, there’s hardly any visibility to go around. When the fog does lift, enjoy as the Tetons rise in the east and the 9,000-plus-foot Big Hole Mountains in the west.

There are three options for getting to Grand Targhee. The most accessible is via air. Fly to Jackson Hole Airport, located within the magnificent Grand Teton National Park, which is the closest airport. From there it’s a one hour and 20-minute drive via the Teton Pass that takes you into Idaho before finding its way back to Wyoming. A second option is Idaho Falls Airport, roughly 90 miles from Grand Targhee. Thirdly, if you want to make it into more of a road trip, fly into Salt Lake City International Airport and drive north for about four hours before hitting the resort. Both Jackson Hole and Idaho Falls airports also have shuttle service available. 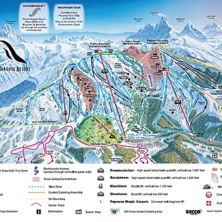