Not all Washington state's Winter fun centers on the Cascade mountains, as the Mt. Spokane Ski and Snowboard Park, demonstrates. Ski bums on the east side of the state favor this ski area that sits within the Selkirk mountains, northeast of Spokane, near the Idaho border.

Those flying to the area will use Spokane International Airport before transferring to rental or other ground services. Interstate 90 is the major roadway in the region and will bring motorists to Spokane. Canadians driving from British Columbia can make use of State Highway 31 starting south of Nelway. State Highway 206 is used to reach the resort itself.

Explore One of the Interior NW's Tallest Peaks

The Mt. Spokane Ski and Snowboard Park sit within the Mount Spokane State Park, has a base elevation at the lodge of 4,200 feet (3,818 feet at the lowest lifts). The summit elevation is 5,889 feet provides a skiable verticle of over 2,000 feet. That offers potentials that ski bums would savor anywhere.

Mount Spokane averages 144 inches of snowfall each season, far below the averages on the west side of the state. The ski area does not have snow-making equipment, so Mother Nature dictates the start and overall length of the ski season here. It operates seven days a week and offers night skiing on 50 nights. Park rats and casuals from Spokane note that January through mid-March tends to be the best part of the Mt. Spokane Ski and Snowboard Park season.

Over 1,700 acres of skiable terrain await skiers and snowboarders. It is also worth noting that the Mt. Spokane Ski and Snowboard Park offers permits for adventurous souls wanting to gain Uphill access can pay for a pass to do so. Rules, including times, must be followed at all times.

In addition to the main section at Mt. Spokane Ski and Snowboard Park, guests also have access to Hidden Treasure and Northwood. That keeps runs spaced out across the mountain with plenty of trees in between. Locales have a better chance to cut fresh tracks after a snow storm since they can plan quick trips after a dump.

There are 52 runs within the boundaries of Mt. Spokane Ski and Snowboard Park, with over half of the terrain rated blue for intermediate skiers and snowboarders. Just under a quarter (23-percent) of the runs are green and ideal for newbies and the remaining 15-percent of the terrain rates black diamond for advanced rippers and shredders to use. Sixteen of the runs are capable of supporting night skiing at the Mt. Spokane Ski and Snowboard Park.

Seven lifts serve visitors to the mountain, and lifties can maintain an uphill capacity of 8,000 riders each hour. That includes five double chairs, a triple chairlift, and a surface lift in the learning area is available as well. The Mt. Spokane Ski and Snowboard Park have a terrain park with over 50 features and a tubing hill for those looking for something different. 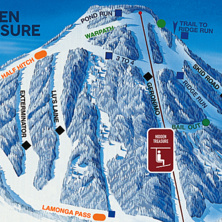