Skiers and snowboarders from the Big Apple know of several ski venues close to the city, but the Campgaw Mountain ski area is ideal for beginners in terrain and staff. It sits only 16 miles from New York City, giving guests the ability to have fun and return home quickly.

Locals (and visitors to the region) will use Interstate 287 to drive here, with several freeway options that reach New York City or other communities around New Jersey. A plethora of airfields is available for guests flying into the region to use, with International airports at John F. Kennedy (New York), LaGuardia (New York), and Newark Liberty (New Jersey) nearby.

The Watchung Mountains Only Ski Venue

The Campgaw Mountain ski area rests in the Watchung Mountains, three parallel volcanic ridges distinct from the Ramapo Mountains nearby. The winter venue sits in a part of New Jersey with four seasons, providing a larger temperature drop in winter when compared to the subtropical climate to the east. Average annual snowfall amounts are under four feet (about 45 inches), so snowmaking capabilities are a must. Campgaw has 100-percent coverage, with the snowmaking equipment using 8.5 million gallons of water each season to supplement what nature provides.

The base height of the Campgaw Mountain ski area rests at 450 feet. Its summit tops out at around 726 feet, giving skiers and riders a vertical drop of only 274 feet. That is more than enough for newbies and casuals to enjoy the base without running the risk of bombing uncontrolled downhill. There are still a few spots that experienced skiers and snowboarders can drop in for a challenge, though.

While the Campgaw Mountain ski area is small, its proximity to the Big Apple and surrounding communities do not make it overcrowded. With a focus on beginner terrain, the Watchung Mountains only ski facility has open trails, snow tube runs, and no wait times on the lift system.

Anyone interested in using New Jersey's Campgaw Mountain ski area to learn on or enjoy relaxing family-oriented skiing has over 20 acres of alpine-skiable terrain to choose paths down. Between the lower and upper sections of the winter venue, there are a dozen trails guests can ski or ride. The Campgaw Mountain terrain divides equally between beginner, intermediate, and advanced/expert runs. Roughly 33-percent of the trails are either green or blue ratings, with the remainder divided 25-percent black diamond and 8-percent double diamond.

The lift system on Campgaw Mountain is not extensive, with three surface lifts and a couple of chairs operated by lifties to keep skiers and riders moving about. Most of the trails are straight downhill, so they tend to be wide-open instead of sitting among the tree line.

Visitors to the Campgaw Mountain ski area have night skiing access on about half the mountain, making it a place that local park rats can enjoy after work. The winter venue also has a tubing area so guests can enjoy the pow without donning skis or snowboard. 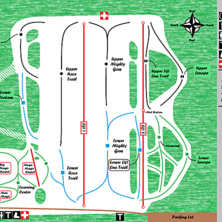