tingilya
Note! This text has been translated by Google Translate.
Show original

I seasoned there 2007 and thought it was a cool place! around 25-30 pistes I think maybe 10 lifts do not remember. Most blue and red pistes. There was some black there. They had some fun trails through woods and gullys and slopes, but they are only open in terms of snow access.

When I was there they had two parks, one with a little less jump and boxes in. Then a bigger park with big jumps, a rainbow, a bus, rails boxes and so on, and just what they called the spine, like a quaterpipe but turned around "wrong way.

The snowfall was ok, but it was not that much pillows, but to be Australia it would be okay. apparently 2007 was a good year so I was lucky, the year before, a lot of slopes were closed.
But there were a couple of days of blowing and then the lifts closed, foggy days there were sometimes too.

The village of Falls Creek is cozy and quite small. Most hotels and restaurants. Do not buy food or liquor in the food stores there! Tokdyrt! Better to buy below the mountain in Mt Beauty before heading up, there are a number of bottles there. There were some good shows, The Man was one of them, many seasons hung there.

By the way: There are a number of cafes, restaurants and so on the slopes. Possibility of cat skiing is also available but only after snowfall. You could also ride a helicopter between Falls Creek and Mt Hotham (which also should be a bar ski resort). There is a "tube" back, like a pulka back, but you go in big bath rings, (a little bit fun a foggy day in lack of better) They had some competing, big air, and so in the season.


Do you drive a car yourself - do not forget the chains! Do they start snowing (winter tires? Haha, aussis do not think so, 4xw operation is ok, no chains are needed), and occasionally during the season it's a police raider when you have to show up the chains even if it does not snow. And along the way up, it's not just crying out of those pretty, sturdy rails that will keep you on the road if you're kidding, so chains are an advantage ... (keep an eye on, we saw a vombat on the way up once!)

In summary, Falls Creek is a cozy place if you do not have too high demands on the ride. Do not go here all the way from Europe so wow is not it. But Aussies are nice people and it's a good mood. Got a 4 for too many things, but on the whole I had a lot of fun there and the resort itself was shown by its best side! 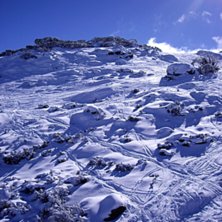 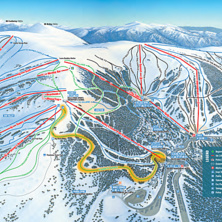