Hammarbybacken is a hill built on waste and excavation soil from all sorts of different construction projects in and around Stockholm, with its top now sitting at 90 meters above lake Mälaren. Neither the vertical drop nor the number of runs is anything to rave about. Still however, with more than a million people living within close proximity, this artificial ski hill, just south of suburb Söder, shouldn’t be frowned at.

Scott Avery (Guest)
First visit to Hammarbybacken today, so I thought I'd add a review. For people visiting Stockholm and in need of a quick fix on the slopes its great. Two T-bar lifts and 4 short runs to choose from with a couple of jumps and some small off piste areas. Its as basic as can be but good for a couple of hours. When I went it was hammering down with snow so there was some nice powder on the runs and even though there were lots of people there was plenty of space to mess around. I met a fellow snowboarder from Stockholm and he said it usually has a lot of ice on the runs, so its best to go after its been snowing a fair bit. Don't expect to much, after all its a hill not a mountain, and the reason there is a hill here is that it used to be a rubbish dump! Now if you ask me thats a great way to recycle! There is a pretty chilled vibe, and you can buy a pass by the hour. The more advanced among us will get bored quite quickly, but like I say, its good for a quick fix, and beats the gym any day! You can hire gear there to. Also very easy to get to by bus or tube, then a quick hop on a tram.

Grade wise, for what it is its OK and saves you a 3 hour bus trip to the nearest 'proper' resort.

Can't wait to ride this park... Hopefully it will be good enough!!!

We call in advance to ask if there are lockers with such lock that you can lock several times and micro so we can heat our own lunch. Gaining affirmative answers to both. Coming to the hill; The cabinet swallows the ten crown and then it was gone. No micro so we have dragged food unnecessarily.
The slopes completely abysmal !! So badly cared for, big ice cream cones that saber the layers, icy, rock hard. No snow cannons despite freezing temperatures.
I, who has just been sick, can handle a ride in the little green child's back and can't bear any more. Have bought a 5-hour ski pass that is unused. But I must not return it because I have traveled in the barnback !!
They stand and claim that everyone who goes in the little kids' back - ie parents who teach their children to go - pay for ski passes! And that they do random samples from time to time. What a joke!! Do they believe in that themselves ?! They take my money for my unused 5-hour card, to cover up for all those who go in the kids' back and who do NOT pay.
Never ride in Hammarbybacken, go to Flottsbrobacken instead.

AmyBoswood
Note! This text has been translated by Google Translate.
Show original

Hammarbybacken is a hill in central Stockholm. There are 5 runs one black, one red one blue and two green.

We have been to Hammarbybacken several times. The first time I was very surprised to see a ski slope in the middle of a capital!

Hammarbybacken is very small but has everything from green to black slopes. Because it is such a small hill, more experienced skiers will get tired of Hammarbybacken very quickly. We visited Hammarbybacken when our children first learned to ski and it was perfect then because they have two rollers.

The best thing about Hammarbybacken is the view. It is pretty cool to ski and at the same time look out over Stockholm. It feels like a very unique experience.

You can compare Hammarbybacken with other ski slopes in Stockholm County eg. Väsjöbacken. What makes Hammarbybacken unique is how it is located in the center of town and close to municipal traffic. It is quite possible to go municipal if you want to ski in Hammarbybacken.

You can buy everything from a 1 hour ski pass to a season pass at the harbor village. A seasonal passport is cheaper than a season pass on ski resorts' other ski resorts, for example. Åre and Vemdalen. Unlike Åre and Vemdalen, even small children (0-6 years) must have ski passes to be able to go in Hammarbybacken. I think this is very poor done by skistar. There is a small cafe that serves affordable simple food.

Plus
-utsikten.
- proximity to central Stockholm
- from green to black slopes

Melvin (Guest)
Note! This text has been translated by Google Translate.
Show original

Really bad. Going 2 hours car to ski on a study day, we look at the web in the morning and it says that the slopes and lifts are open. When you arrive, it is suddenly closed, even though the web says they have been open. Just go home now again. Useless ski resort

Hammarbybacken is Stockholm's own small ski area. Unfortunately, it's really bad about almost everything. The only reason I go there is the proximity, but even it does not outweigh all the shortcomings that exist. It feels like Skistar operates this with the purpose of bringing people to other facilities northwards and to raise interest in the name Skistar.

The shortcomings then?
If you look at the pistemap, there are four slopes, and not five. But despite that, Skistar often claims on the website that Type 4 of 5 slopes is open. When there are not even 5 slopes. And that four are open is not correct, it always seems to be the same regardless of the current piste mode.

The black piste Hemsedal is not locked out and appears to be runable, but you go there, you raise your layers because it is a thin layer of snow above hard ground. Directly dangerous, but nowhere is it indicated that it has been shut down.

The slopes that are open are not maintained and are broken in the evening, while many can go on weekdays. Either there are ice rinks which, for example, are not Skistar's fault, but when it's snow it's driving and generally poor quality. If it were not because it was "Hammarbybacken " and close, skiers would accept that order on the slopes.

The lifts are quite stubborn and jerky. No big deal but make sure everything seems to be worn. "Lift area " is raised and the surface is visible and you have to look up where you go to not scratch the layer.

The positive is that everyone in the staff is nice and helpful and they are good representatives of Skistar.

My suggestions for improvements.
- Fix the lift-passage so that it is not possible to infect between the grid and the lifts. Then you will receive more money for maintenance.
- Prepare the slopes better.
- Update the website and talk about what really matters.
- Fix your webcam so it streams instead of viewing still images.
- Update the lifts to be less jerky.
- Fix the "snow " in the lift area so it is not a landmark.

cj-nacka
Note! This text has been translated by Google Translate.
Show original

The good thing about the slope is that they arrange to build rails and bumps. The slightest downside is that there are only 2 slopes. hehe a little fun that a slope is for slalomers and one for parkers.

volle
Note! This text has been translated by Google Translate.
Show original

- icy as fan OFTA
- bad and bad lifts
- unpleasant lift staff
- that DIF ALPIN often takes all those fun slopes every day!
- that you are fast at the lift (short slopes)
- pretty busy hope

Hammarby hill, a nice Stockholm hill in the middle of stockholm. But it's a bit of a shame when Dif Alpine takes the slopes and turns them off for everyone else. But if you live in Stockholm and will go here DO NOT GO AT HELGEN !! If you buy 2 hours of lift pass, then an hour is a lift! Go here on weekdays!

avillberg
Note! This text has been translated by Google Translate.
Show original

- a little busy hope
- down in 15 sec. "little trick"
"Snowman's snow is not the best thing to go on

a nice good back in the center of Sthlm, good food (expensive) but it works good rails, but it has not been the best year when it comes to snow so they opened very late, sprayed a lot with the snow cannons so it became bad snow but should you only get sick, it's sick nice, PRICE VERY incredibly good prices on ski passes.
close to bus and crossroads "supergrymt".

bellabella
Note! This text has been translated by Google Translate.
Show original

The hill is okay, good to keep in mind that it is so central. Super nice if you go there in the evening when almost nobody is there, then the short back is compensated for having it all for yourself! 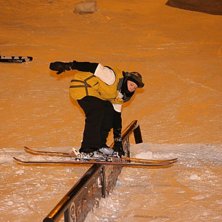 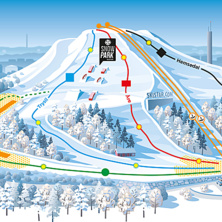