This Colorado Front Range resort is more of the modern kind, built in the Rockies with a ski area spanning across three mountains, set against the scenic White River National Forest. The principal mountain, Dercum Mountain, boasts a sick terrain park and tree-lined slopes.

The other Summit Country ski resorts, the wholesome trio of Vail, Breckenridge and Beaver Creek, are not even an hour's drive away.

The closest neighbor, Arapahoe Basin (A-Basin) is on the same highway, a mere eight kilometers beyond Keystone.

The resort might not necessarily be known for its advanced or expert skiing but don't let that deter you. With its 3,148 acres, 121 trails and average snowfall of 235 inches, there's great variety (including glades and bowls) to be found all over the mountain. In particular, the backside features a couple of nice, and steep enough, black-diamond runs.

If you’re seeking fantastic powder- and tree skiing, look no further than to the three peaks: Erickson, Independence and Bergman. That’s 1,000 acres all together,

Otherwise is Keystone’s North Peak, which sits right behind Dercum Mountain at 11,66- feet, and its long bump runs a good way to get a nice feel for the place. Also check out The Outback (Keystone’s highest peak at 11,980 feet) or the Santiago Express. You can catch the Outback Shuttle for a lift to the South, and North Bowl, and skiing above the treeline. Keystone's high-speed lift system makes it quick and easy to go anywhere. If you'd rather hike though, do it along the ridge from the summit to reach a glade area called, "The Windows."

The award-winning A51 Terrain Park (it came second in Newschoolers Park Poll 2017 and has received other nominations as well) is spread across six areas, 60 acres in total. I-70 (named after Denver’s Interstate 70, infamous for its congestion) features small boxes and jibs while Mainstreet boasts multiple jump lines. With over 100 features, you’re probably not surprised to find out that the park even has its own designated lift, the A-51 chairlift.

Did you know that Keystone features one of the biggest night-skiing systems in the U.S.? Several slopes, and the terrain park (which is one of the largest terrain parks in the state mind you), remain open way past sunset. The resort even provides a special night ski-edition of the piste map.

The resort is basically next door to Denver, only one and a half hour away by car, so if you just want to go for the night skiing, that’s totally doable. Taking into account that you have a designated driver to take you, and your skied out quads, home.

Great place about 1h from Denver. Included in "coloradopass" that can be bought in the pre season for about $ 380. Good slopes and chopped offpiste. I... Read more (59 words) 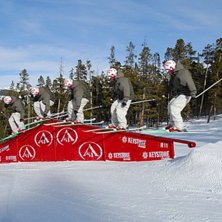 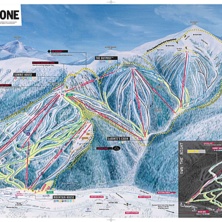