Loveland, it must be love at first sight. Colorado’s tenth largest resort sits on the Continental Divide that stretches from British Columbia in Canada’s Pacific Northwest down through the States to Central America. Surrounded by Arapahoe National Forest, it’s located north of the City of Loveland (also known as Sweetheart City), which got its name after the pioneering railroad builder W A H Loveland. It’s almost next door to the state’s capital, Denver, which is only a little more than one hour’s drive away.


Loveland loyals have been coming here for the last 80 years - for the snow, the friendly atmosphere and the low price tag. Because despite all its pros, the resort tends to fall in the “under-the-radar” category.

A group of skiers discovered the area and its famous champagne powder back in the 1930s. And in 1936, the Loveland Ski Tow Company officially opened. During the late 1960s, Loveland became one of the first ski resorts in Colorado to feature an extensive snow-making system.

Another claim to faim is that the ski resort is one of the world’s highest with a summit elevation of 13,010 feet. Loveland’s highest point is fittingly named Thirteen Ten. To get to this spectacular high-alpine terrain, jump on the Loveland Ridge Cat for a free ride. It’ll take skiers along The Ridge’s north side so they can access Marmot, Field of Dreams, Tickler, 13,010 and Velvet Hammer.

The season usually runs from mid-October to mid-May, making it one of the U.S. resorts with the longest season. Nine months of the year it dumps consistently, with an average annual snowfall of 422 inches.

Loveland is one of the few in the state who is still independently-owned. With your lift ticket, you get a 2-for-1-deal: Loveland Basin and Loveland Valley. A chairlift connects them, each with its own base area facilities. That’s a total of 1,800 acres of glorious terrain.

Chairs 4 & 8 take skiers to some epic tree skiing. The Basin offers a mixed plate of bowls and cruisers. Advanced and expert riders will gravitate towards the Ridge’s open, steep terrain, fresh powder and the sweet view of Summit County.

Not entirely surprising, the resort attracts its fair share of couples on Valentine’s Day, many even marrying at the top. But a prerequisite before you can seal the deal is that you’re a skier or snowboarder so that you can get down by your own means. Fair enough.

Loveland is like a perfect day in the seal during the first weeks of the season but with a little more fall height. Old slow chairlifts that are ok wh... Read more (114 words)

buda
Note! This text has been translated by Google Translate.

Skip the pistachio and lift your passport instead. Equally good driving and heavy traffic up and down make you never have to wait a long time. The sys... Read more (36 words) 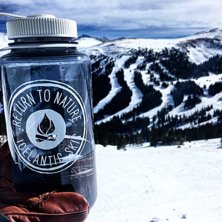 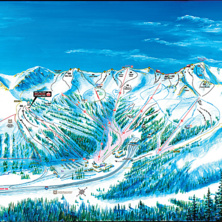