Few places are as mythical as La Grave, a small ski resort with only 700 inhabitants. With only one ski lift, you would be forgiven for wondering what all the fuss is about. The lift is very robust, however, and it takes you straight up to the monstrous granite mountain La Meije and you now have more than two thousand meters of vertical drop in off-piste skiing.

This is not a family destination, but rather for daredevils who want to ski in waist-deep snow. The gondola lift takes you up to 3,550 meters above sea levels and you have access to a paradise of off-piste skiing over vast areas, completely without snow grooming tracks or ski safety barriers in sight.
To get the most from La Grave, it is best to book a guide, although self-guiding may be possible in the best weather conditions.

La Grave’s future is a little uncertain, however. The lease of the gondola lift expires after the 2016/2017 winter season. There have been many “final” days announced in the past though, and the lift seems to always survive somehow.

Jure Bernik (Guest)
You have to go. After that you can stop skiing.

hop (Guest)
Heh... what happens in La Grave, stays in La Grave (unless it's posted on the interwebnet). TT, LA, Glisseur...they all know.

One of the top 3 lift-serviced areas I've been to, up there with Mt. Baker WA, and Kirkwood CA.

per jacobsen (Guest)
very over rated. need to have a month or two for good conditions. little snow.

Have been in la graves both as snowboarders and skiers. The resort is pretty good! I have traveled with a guide both times and they are highly recommended. The area is large and can be dangerous if you go wrong. They are really there anyway to discover, but they are easy to traverse to find new lines. The ridge at the top is fantastic but they also have fun with all the forestry further down. They never have any lifts but the lift is slow! You must expect at least 45min to get from the village to the top (the slope lift at the top is almost always closed). Of course, staying at gite le rocher makes a really fun hostel with cheap rooms good breakfast and good beer. You can find a ski guide at snowlegend opposite the tourist office. If you like to ride and go off piste then you should definitely go to law ravine! I flew to Milano and took a rental car where it took 5h to drive up

StigStrand
Note! This text has been translated by Google Translate.
Show original

In recent years, have read a lot of praise about this amazing ski resort and finally it was time to visit this legendary place for three days in February 2009. We were trained, newly looked-up and really expectant.

Setup could not be better. Cloudy on the highway from Milan, toksnöade on the way up the mountains. The car and snow chains just managed by the passports. At four o'clock in the morning, the French idiot gendarmen closed the bomb in front of our nose as we passed through Col de Lautaret. It was going to sleep in the car in Serre C and spend the day there with 50 cm pow and blue sky. Unexpected bonus and we found how much skiing anyway - a sunday.

In the evening we went on to La Grave and checked in at Skiers Lodge. Very spartan room but ok, we were after all there to go skiing.

Early breakfast and we met up with our private guide. He told me that the second part of the cabin had been closed for three days because of snowfall ... and it waited between 70 cm and I m (!) Pow on top according to his friends ..... We slung down to the elevator and stood us in queue 0820, 40 minutes before the elevator opened ... and it was kind of 100 pers before us in sex ... hmm popular place this ....

When we arrive at 1020 (the lift is not efficient, get eggs and it takes about 30 minutes) climbed out and looked like it had been a pistachio conference at the top. There were trails everywhere .... incredible .... how could it go soooo quickly? Had the liftsnames overnight on top with their polar and then laid lines since 7 in the morning? Well after two ounces of heat it was time to grab the gobits. See below:

To get to the above yard it was a good slight ride. In addition, after the coulores, there were some flat shuttles but a few varying shifts. Smack but nothing special

Chirouze (right I think it was) This trip, according to skiing, should be one of the great skiing in the Alps!
From the top down to the woods a quite ok yard with various landings where the field was annoyingly divided by after 3-400 meters, the guide stopped and gathered the group (we were five). The forest fog was highly mediocre and consisted of a number of different parties where one did not really see where the ride was going. After repelling a little more uninteresting forest transport to end in a 100m wide and about 1km long soft ride to the brook where we went up to a waiting taxi.

The above yard was mixed with some mixed wooded logs.

And then I have not even come to the MOST IRRITING OF ALL ... these devious shipments to the elevator ... The road is mainly on the sides of the mountain. the front can only be driven under certain stretches, so all the rides where you intend to go to the elevator (not for waiting taxi that takes one to the lift), you are forced into one kind of catching the last third of the yoke. This means that after some hours these (steep) transports are busy, hard and icy. No matter how far you go down to the elevator, you'll be here sooner or later. We asked the guide about alternative roads down and he said that if you want to get the lift up you have to go down here. I have never read about this somewhere at all. It killed about 35% of the ...

Summary:
Alpernas by far the most overrated ski resort
Go here ..... one day ..... then go on.
Hire a private guide
Apt transports from the train to the lift stations are a killer
Tiny ride despite guide, we had PERFECT CONDITIONS, but Karma did not change
Hard to get hold of the area
The village is ...... well ...... no city .... there are a number of houses that stand together
La Grave's reputation lives its own life and has become much bigger than the town

Were in La Grave March-07 when traveling to Serre Chevaliere. It was a very nice day trip, unfortunately no news but the guide found cruel riding anyway. We did bl. Another two of the "famous" coloiries on the mountain. Is not sure if this place is suitable for a full week though. If you are unlucky with the weather and snow conditions, it may be a rather boring experience. Think more about living in Serre Chevaliere, then make day trips to La Grave.

Niclas (Guest)
Note! This text has been translated by Google Translate.
Show original

Season 96/97 (v7 type)
instead:
I was young mesig and a little scared. The dining room at the lodge had one of the finest outlook in the Alps. Aftershine on the terrace nice relaxed. BUT Pelle can be a bister man, maybe he has his reasons, little warning there though. Good music and nice atmosphere.

skating:
Bad with snow and some complained about it, with the result that we went for a day at Serre-Che. There was a lot of talk about steep corridors and banana and le lac is fun in good snow. Trip times were a challenge. A few days on the glacier in the snowy snow and blue sky absolutely amazingly beautiful, quiet and crazy. Good speed on the ride and tough sometimes to keep up with. Good ride overall although sometimes it was a bit bad with snow. The traverses are obviously lurking at high speed.

The people!
A blonde at the lodge Dana came from Napa Walley CA in tight zebra pants. An elderly old man was called "Tracker" and had his name from Indians. My room mate from Norway drove down to a stream in Serre-Che. The fool who was most fooled by all dropped the ski in the entrance to a corridor and was killed in a place where one can not fall but managed to get out of Pelle.

Went on this trip myself and I did not realize when I was going home but was not packing because I went with the new guests all the last day. Have promised myself to go back.

OIa (Guest)
Note! This text has been translated by Google Translate.
Show original

Good place under the right conditions. Now the site is known and the more easily accessible snow is quickly harvested on the day the upper part opens. The two easiest available colouirs become quite directly two puck pails. To suck the best of La Grave you should preferably be in good shape and have a lot of skis in your legs.

A lot of stones, stumps etc that need a heavy snow base to hide in. Everyone in my group hurt the skis as much a day as a week elsewhere and some aggressive bruises from nature could be exhibited on departure. The price for everything is off-piste?

Do not forget to top the possibilities around! When the easily accessible snow was transposed to puckles, we crossed the valley and found cold sides with cushions using the studs! If I come back, more days will be spent on horseback riding.

Beautiful mountain with wild view and very appealing that there are only two pisted slopes, and they are on a glacier :-) If you have been tired of pushy skiing, it's heavenly to come here. For the really tough riders, there is a lot to take off. May admit that I have to rough myself for the tougher fields (or switch back from telemark to slalom ;-).

AnnaMunthe (Guest)
Note! This text has been translated by Google Translate.
Show original

La Grave has everything I usually look for; tough and untouched driving, hard physical performance, delicious nature experiences and above all that it is relatively crowded. Even though it did not snow for 3 weeks, I got pillows so I was drawing. 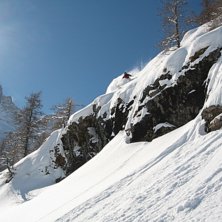 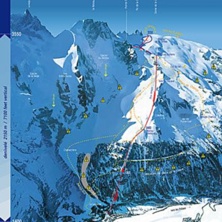