Nestled among the Sierra Nevada Mountains sits Lake Tahoe, a large freshwater lake covering more than 191 square miles. It is the largest lake in the United States after the Great Lakes. Positioned along the California and Nevada border, Tahoe rests west of Carson City, Nevada.

Interstate 80 sits north of the lake, and several US Routes and State Highways provide access around the shores. The Reno/Tahoe International Airport is 50 miles from North Tahoe and several smaller airfields service communities in both states near here. While the lake itself is associated with Summer fun, the mountains around it contain some of the best ski venues in the nation.

Well over a dozen ski resorts provide skiing and snowboarding access in the Lake Tahoe area. The geology in the area formed by normal faulting, with the lake's basin sitting between the Sierra Nevada crest of mountains to the west of the lake and the Sierra Nevada spur called the Carson Range to the east.

A typical continental climate provides warm summers and cold winters with plenty of snowfall. Average winter temperatures hover above freezing during the day and drop to the upper teens at night. The region offers 300 or more days of sun, so visitors will get to play in comfortable weather and sunshine as often as they ski during a storm dumping fresh powder.

The Lake Tahoe area receives lots of snow each year, with averages at many resorts near 400 inches. All resorts in the region make use of snowmaking equipment and nearby watersheds to supplement naturally occurring snow. That keeps surface conditions consistent with warmer temperatures and provides longer ski seasons across the Lake Tahoe region. Guests will need their goggles and sunblock more than their balaclavas on the slopes, but that does not mean that skiers and snowboarders should not dress lightly around Lake Tahoe (remember that it is easier to remove layers than it is to add layers one did not bring).

The Lay of the Land

The Lake Tahoe region is built around tourism, with skiers and snowboarders the target audience during the Winter months. More budget-friendly places like Donner Ski Ranch, Homewood Mountain Resort, Kirkwood Mountain Resort, and Soda Springs Mountain Resort are considered no-frills. They offer basic amenities but focus more on the action on the mountain and less on what is happening off the snow. Conversely, places like Northstar California Resort offers high-end dining and shopping, as well as red-carpet guest services.

With nearly 480 miles of skiable slopes, the 146 lifts in the Lake Tahoe area stay busy. Most mountains use several lift designs ranging from surface lifts to gondolas. Lifties, support staff, and ski patrols keep guests moving along safely in bounds. 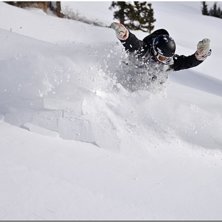