James (Guest)
This slope is good for beginners but has fairly short runs and the chairlifts are pretty slow. It's nice and close to Beijing though, about 50 minutes on the new expressway. Toll both is 30RMB each way and the ski field parking is 5RMB and then 30RMB to get into the skifield area. Chairlifts are about 180RMB for four hours and approx 100RMB more for rental. Remember to have enough cash for a deposit on any gear as there are no cash machines!!

I was bored of this place within about an hour. The runs weren't long enough to make me tired so I started getting restless on the chairlift.

Viktor (Guest)
Note! This text has been translated by Google Translate.
Show original

Visited today February 12, 20013.
The slopes can be compared to the hovfjäll in Sweden. Pretty short and not so many. The lift worked well and was basically not a single stop. Most of the slopes were well pisted. However, the only black back was that they are completely useless. Be like a puck pistachio with a lot of ice cream thanks to all too many beginners on snowboarding that plowed up big piles.
Having your own equipment is recommended. Rent the equipment is totally useless. Pants that turned out to be from the 80's, use so much that the inner lining was completely slippery and they sat very strange. Have never been to such badly maintained skis, the edges were probably never grinded nor rolled. It was so bad that they stuck many times (even in red backs) so it hit. If it was not steep, you had to stand up. (THIS IS NOT TRANSFER) You do not bind the ties but only after the size of the boot, which led to the sharpening of the skid.
RECOMMENDING becomes your own equipment. If you have your own equipment, say this when you buy the lift card.
Nevertheless, it is worth a visit. 280 Rmb (290kr) for lifts and half-day ski rentals.

We went local bus there from Dongzhimen, costing 14 Rmb and takes just over an hour. We are skipping a station called Xida. One tip is to tell the ticket controller that you go to Nanshan so he tells you where to go. At the bus stop there is a taxi (black usually), which should cost between 20-40 rmb and not more. Taxin takes about 10 minutes. 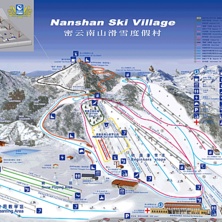