I was here week 12. Very mixed weather with sunny, cloudy, windy, windy, hot, cold, snowy and rainy. It was about 14 + C and no snow in Neustift. The lift system at Elfer was completely shut down. Went on the Stubai Glacier. The slopes were average. The snow was wind-pressed so the outpouring did not differ much from the slopes in the slopes. The ride over 2300 m was turned off a few days when it blew too much. The restaurants are large and modern and serve good food but not very cozy. The days when the top of the Stubai Glacier lift system was shut off, I went to the Schlick 2000 ski system. It is located at the resort of Fulpmes and has beautiful mountain formations around. Easy skiing and you go through the system in one day. A cozy setting with nice little bars and restaurants on the peaks. Neustift as a place is quite small and modern. Weak feeling of being in Italy. A few restaurants and bars around the small but cozy square. On Wednesday, the only evening was a bit more fun when there was live music at Dorfpub with its American bar. A lot of Germans and Austrians. Otherwise, it was mixed with European nationalities. Good bus connections just 1.5 hours from Innsbruck.

Overall, it is a medium wound for easy skiing. Snow-proof on the glacier and cozy in Schlick 2000. Nice but easy sleepy place. / Börje Hammarling

Another hot tip in addition to Stubaier Gletscher is the Schlick 2000 plant in Fulpmes a little further down the valley mentioned above / below. When I was in Neustift a couple of years ago it was snowing, so the glacier was closed for a couple of days. Schlick then offered a rather stimulating forest drift in his place.

The resort has a number of mediocre slopes which lie in a pot between three beautiful peaks. If you instead of going down the pot keep right after reaching the first peak (where the system begins more or less), you can slope around the first mountain around which there are nice, slight and steep forests that take one back down to the elevator. In total, about 270 degrees of mountain is available in this way, which means enough space for all safely up to a couple of days after snowfall. Enjoy!

Gustaav
Note! This text has been translated by Google Translate.
Show original

I was here on the sports license and I'm already back. I stayed at a small hotel outside Neustift oh ski on Stubai Gletscher. There is a huge amount of offpiste that you can access without climbing very far. There are only 22 slopes, but the shortest is 800 meters, and it is the exercise back. Efeter has traveled all the way, you can go up to the top and then down to the valley station. It is less than 1 and a half miles without lifts or difficult transprt stretches. Awesome fun

Falo
Note! This text has been translated by Google Translate.
Show original

Very good place, I've been there in summer -02 and went skiing as well as where there were 2 weeks in the winter. Finding offpiste and very snow for sure. In the summer there is nice MTB cycling as well as a paragliding paradise. If you want to escape Swedes it's a perfect place. I have already booked an apartment for coming winter for 6 weeks. It is also close to other nice ski resorts and only 15 km to Innsbruck. Well worth a visit.

Linda (Guest)
Note! This text has been translated by Google Translate.
Show original

if there's someone who has not tried Stubaital, Stubaier Gletscherbahn and Neustift ... then you've missed something !!! It's really worth going there! Always a lot of snow, well-prepared pistons, but not so badly offpiste ... Looking up to the panoramic restaurant, you have a great view of the Italian Dolomites and Sölden. How can it be that they are so few Swedes who have found it? In addition, this is where you meet cool people both on the glacier and on the after skis that can not be missed in Mutterberg on the way down. Everybody has the same thing in common ... they love to get down in the snow!

Now I write of my childhood memory when I was in Neustift, I've never had fun with foreign kids like that and when the slopes were a little bit more difficult than I used to be, the food was to talk about especially the snitzels . All I thought was bad where I came last in the ski contest together with 10 other Swedes (many Swedish tourists then)

The Stubai glacier is located south of Innsbruck.
Glacier skiing from 3215 m. Matterberg valley station
located at 1750 m. Lanes to 2900 m at the panora-
marestaurangen. Lots of red and some black pistes that are well kept. Even blue is available, so the whole family can enjoy themselves. Trailers for cross-country skiers are located at approximately 2500m. Opistad router to valley station
from 3215m. provides guaranteed lactic acid in the legs. The area
is isolated from other slopes but so big that it is enough for a week. You can also solve lift passes for
the entire Stubaier valley where Fulpmes is included. In Neustift there is a wide range of restaurants and other après ski if you can, but here is a ski-
the rate applicable. In the village there is a cable car to Elferspitze about 2000m. with enjoyable slopes as well as one
eldorado for kite flying and paragleiters.
The area is mostly frequented by Italians, Germans
English and Dutch. Few Swedes have found this wonderful valley worth a visit
summertime. 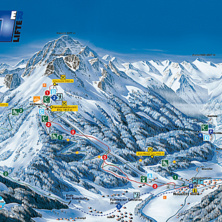