Located just one and a 1/2 hours from downtown Seattle, Stevens Pass sits right on top of the Highway 2 pass, in between Crystal Mountain and Mount Baker, in the North Cascades among old growth forest. Stevens Pass isn’t a huge resort but it more than makes up for it with some of the best tree skiing and deepest powder that the Pacific Northwest has on offer. It’s thanks to the Pacific storms that roll in off the ocean and create formidable dumps over the Cascades. Stevens is synonymous with abundant snow (an average snowfall of 462 inches), and there are few resorts in the country that can rival its high-octane powder.

Yet that warm, moist ocean air meeting the cool winds of the East can result in some pretty wicked weather with temperatures to match (the change can be as high as 20 degrees in under an hour) with a downpour at the base and snowfall higher up the mountain.

Just a fyi, as usual with the ski resorts situated in the Pacific Northwest, storms means low visibility. But because the resort is built on Forest Service land, those deep-set trees come in very handy. They’ll take the heat during whipping, howling storms, providing both protection and allowing for some decent visibility.

With its 1,800 vertical feet and 1,100 acres, Stevens Pass mixes crazy steep with more intermediate, forgiving terrain. The weekend and holiday crowds flooding in from Seattle can take their pick among the terrain park (it’s been called the best in the state), diverse, thrilling off-piste skiing with tons of natural features and fantastic night skiing. The homegrown resort also has that friendly vibe that makes anyone, novice or expert, feel right at home.

If the weekend and holiday queues can be slightly intimidating, come midweek and you’ll realize the word stress doesn’t even exist. You’ll have most of the mountain to yourself. For the best lifts to access the backside, head to Southern Cross or Jupiter Express. 7th Heaven is a mogul mecca (obviously, on a first come, first served-basis so get there before it gets too carved out) while backcountry-lovers rave about the Pegasus Gulch area. To really get the blood flowing, take the chairlift and hike the rest of the way up to Cowboy Mountain for an awe-inspiring downhill run. A local favorite is Wild Katz, a steep clear cut with lots of hot spots to get some airtime. Cowboy Ridge, when open, offers some of the most epic, technical skiing around.

Platypus2
Note! This text has been translated by Google Translate.

Easy to get there, Super location but difficult with accommodation. 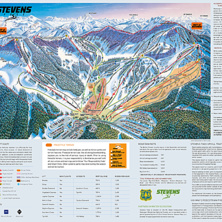