Sölden is almost the furthest one into the Ötztal valley in Austria. The valley is perhaps best known for naming the iceman Ötzi, but luckily the village is not as ancient as the ice man. Nowadays, Sölden is a relatively modern city and does not have a lot of older buildings and surroundings left. You can tell that the village has progressed since Ötzi's time when looking at the lift system. It has many lifts with impressive capacity and a nice design. The area is cool enough for the world's perhaps most well-known agent, James Bond, to have been there hunting bad guys!

Sölden is said to be one of the snowiest ski resorts in all of Austria and most of the skiing is above the tree line. This means opportunities for really big and long runs in the alpine environment with unbeatable prospects when the weather is nice. The flipside is that when the weather is not as nice, the choices are significantly more limited.

Korv (Guest)
Note! This text has been translated by Google Translate.
Show original

Sölden is a fantastic ski resort that strikes most when it comes to skiing but the whole does not lift.
Positive:
Great skiing. Long demanding slopes with incredible variety both steeper and flatter alternatives are available.
Well posted and the slopes are several hundred meters wide.
Incredible and good off-piste
A lot of skiing across the forest border
Fantastic well thought-out lift system with cabin lanes and chair lifts.
All lifts have their function
Very slalom tracks
Glacier with incredible views.
Specter was partially recorded in the salt.
Access to over 300 km of ski runs in more than three days.
Obergurgl and hochgurl also offer really good skiing
Incredibly beautiful view on the peaks
Not much sleep
Negative:
Innsbruck Airport cannot handle the heavy load with many departures.
Food expensive and not very good.
Expensive accommodation that was also not cleaned
Poor service and unpleasant people.
The grocery store is overcrowded and you have to bring coins to get a cart.
Full village with strip club on main street. But if you like a strip club then that's a plus.
Many people
Partly windy at the peaks.
Still recommends the bump great for anyone looking for good skiing.

Thought the slopes were good however we had a little bad luck with the snow, but the weather is nothing you can control. Know more who also been here in December and had super powder (obergurgl)

LarsEkdahl
Note! This text has been translated by Google Translate.
Show original

We went 7th guys on a 4 day ski trip v.5 2018.
The ride on the glacier (behind the world cupback) was among the best we tested! Reminded a little about Sportgastein in BadGastein, as this area also had wide, long slopes, huge beautiful views, hard-packed and even before the slopes throughout the day and also easily accessible offpiste. On the way home, the great retreat had come down to the world cupback. Great back that urged large carvings in high speeds.

Do you want to go up to the glacier is a tip to take the bus to Hochsölden in Arla tomorrow and hang on the gondola lock at 08:00. From there you have the shortest ski and lift road up to the glacier. About 40 minutes later, you can enjoy about 4-5 st loneliness in these wonderful slopes before it starts to fill. Great to just blow and enjoy without having to pair for, for example, cheery Russians. For the devotee, the long ankle pole out to the right is well worth the effort to burn for almost all of the day on almost unstoppable slopes.

"During and after skiing" there was plenty of it, but maybe we missed the Tyroler Pubs with the leather hose and their live music. The 90's music always sounded constant in the speakers everywhere and it's not wrong either. A little more variety on that front would have been great!

There are a couple of fine pasta and meat restaurants on the other side of the river that runs parallel to the main street. The hotel also has top-class food and there is also a bunch of pizzerias for anyone who wishes.

There are free buses every day every 10 minutes along the entire main street. If you do not want to leave tonight, I recommend accommodation between the Gaislachkogl and Giggijoch lifts. There is the city center and the pulse. We stayed at one end of Sölden and had about 20 minutes walk into the city center but you could either take the bus or taxi.

We never tested the night-rodel but it seems to be an appreciated activity of the big and the small. You pick up the bus and go downhill along a nice path down to the village.

We were delighted and highly recommend the travel destination!

swartzkogl (Guest)
Note! This text has been translated by Google Translate.
Show original

negatively
- Get rid of the most common slopes after lunch
- the village. Porrhus on the pedestrian street which is not a pedestrian street but more like the autobahn. A city with most Russian men, is the place a Russian barracks?

Did a dream vacation take a look at the skiing. Nysnö every day and lived at the Gaislachkogelift. Offpiste is there anyway and the Russians cross the piste around lunch. Klena efforts from the resturant industry in the village, better on the slopes.
A 4th because of the skiing and the snow.

Tip: Do you see that it's snowing in the evening, stand on the door of Gaislachkogl when it starts and go straight to Swarzkogel

godin63
Note! This text has been translated by Google Translate.
Show original

Comment on my last review: Austrian guide who has been in St.Anton and Sölden says that Sölden offers a lot more offpiste that is not unaware at once.

godin63
Note! This text has been translated by Google Translate.
Show original

Offpist with mountain guide. I was there week 7 in February 2014 and went three days in a small group of mountain guides (a slant but recommended) from Freeride Center Sölden (check their website) About level 3-4. Sölden had a lot of snow. We went to the cushions, but maybe a bit more packed snow, but nobody crashed somewhere. And not much stone in the joints either and not so many windpine parties. And no riders had been there before us or at least no tracks that seemed. Everyone walks largely above the forest line. Several rides from the top Gaislachkogel began with long or short coulores that led down to flatter and wider lots. On the north side, the off-piste river ended in blue pisted transport down to the nearest lift. On the south side, the offpiste leads down to the restaurants at the Gaislachalm and connecting lift. Fall height about 1200 meters. The longest trail passed from the glacier Rettenbach's top Innere Schwarze Schneid down towards the village of Heiligkreuz, the Holy Cross Church. Fall height 1500 meters. The last bit was a 10 minute walk on the asphalt road (but it was absolutely worth it) to the bus stop. None of the offpiste leaders are seen on the pistons. However, under the counter, the center had its own off-pisto charts with many different leader entries. My guide was called Karel and had a good time. The toughest outpouring so far for my part as a fairly new retiree. But that's funny. Especially the little playful parties farther down with trees and jumps and droppings. The city / village of Sölden itself has no high factor in transit and three six clubs along the city street, but off-road skiing in Sölden is highly recommended!

Marie (Guest)
Note! This text has been translated by Google Translate.
Show original

Always in Sölden Best ski resort in Austria even in the summer, better. Russians, they are in Sölden v1-2 so those weeks do we avoid.

Were there 2012 1 day week 8 and be brilliant sun and nice cold snow.
Just drove pistes all day but were also the best I saw of the 20 ski resorts in the Alps I was on.

+ Possible wide highways to slopes with many 1500m high altitudes and wonderfully prepared.
+ Where are the people? Rid entirely in the slopes in the morning during week 8, where other ski resorts nearby had full houses.

- Only 1m snow depth, when other ski resorts in the vicinity had up 4-5m of snow. Chance?

A0S
Note! This text has been translated by Google Translate.
Show original

I was in Sölden v.2 2012 together with a polar, we traveled with STS. Sölden is a nice place and most of it is a very popular destination for Russians :(

The Russians are, as most people know, generally abundant, unpleasant, superficial and extremely bad on skis. Unfortunately, I'm sorry for my judgment about Sölden as they destroy the nightlife in total, which consisted of 90% full Russian men.

The slopes in Sölden are quite ok, the slopes are often good in the morning before the Russians have woken up and the biggest lift queues are actually formed just before lunch when the Russians have "enjoyed it". On the other hand, it is outside the slopes Sölden delivers on real. Very few Russians go offpiste and ice under the lifts, there are extreme forest potentials and endlessly untouched pads above the tree line.

Meanwhile I was there, me and my polar + two middle aged French people who went offpiste. We were really lucky with the weather and got a heavy dump before we went down and left sunny almost all week. We found untouched pads a week after the dump without having to walk a meter from the piste, which I think was unbelievable as the system is relatively small considering how many people went there.

There is plenty of night life in Sölden, however, the Russians are everywhere. If you are looking for a party then you should book accommodation near the Giggjoch lift as all nightclubs are located there. Otherwise you will have a nice long walk home.

If skiing is a priority, then the Gaislachkogel applies, where the gondolas are new and fresh with a really good capacity. The backs in this area are much better through the day than they go away at Giggjoch.

The Russians unfortunately drop my rating for Sölden, the place is certainly better during the sports holidays weeks with more north-easters. Otherwise, I like Sölden strongly and if you like varied and steep but easy-going offpiste, I highly recommend the resort. Have you been thinking about going down to the alps? To party then I recommend Bad Gastein instead. 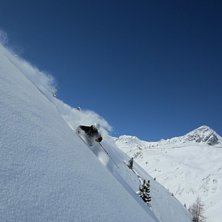 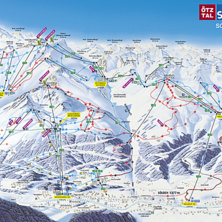