Wille1504
Note! This text has been translated by Google Translate.
Show original

Stay in Pitztal week 8 2015. The place is nice but hardly the best time during the sporting holidays, so there are many other ski resorts that can offer more. We had a lot of snow even though it tends to blow away at the top.
When we were there, many other resorts were taken with plus degrees, as well as Riffelsee. Up on the glacier, on the other hand, there were minus degrees throughout the week, some day it dropped down to -25 which is a bit cold.
The glacier lifts are two gondolas for each 6-8 people and a quick chairlift, liftköer did not exist when we were there.

The backs are well-puffed but are a little messy in some place, you get a bit locked if you choose the lower gondola and can not get to the restaurants or the mountain railroad without taking the chairlift. In addition, there will be a lot of transport skating if you go down the gondola. If it blows a lot, they close at least the high gondola, and then the ride is limited, take Riffelsee as fast as possible.

The lift-borne offpiste is quite good but limited by the fact that the lifts just climb on top. There are good opportunities to go up for nearby tops because several can be reached without a notification, just take a little bit of effort and aim. None of us had turbines without leaving the skis on the back which went well.

We spent one day in Hochzeiger, it became one of the best. The slopes were a little mediocre but the offpiste was really good. We also had it for ourselves because Hochzeiger mostly markets itself as a child-friendly family place. There was good woodland with pretty sparse trees and we found an old lift street with stumps like acted pillows. Wishing that it was on skier's right in the middle of the system. In the afternoon, when we got up we went up and found untouched on skier 's left.

Ola (Guest)
Note! This text has been translated by Google Translate.
Show original

Very good glacier skiing in the pre season
Were there with the children in autumn 2013 2013 V44, superbly well-traveled.
We are going back this year again.
The Sölden and Stubail Valley nearby are also good.

The rating 5 is set for the season October-November.

Premiere in the Alps for the whole family, have a few seasons in the alps in the 80's so I have quite a good experience on free skating. We were here on week 14, 2011.
A great pearl for family skiing, 2 daughters 14 + 12 years and they got a lot of rides.
Good and compact accommodation in relation to skiing, low zone / Rifelsee expired at the end of the week, it was between 12-18 degrees a day down the valley, but the glacier had a cold night every day.
For the carving and long fine hikes, the glacier is highly recommended.
Access to world-class offpiste but with gudie there is unlimited in the area.
Highly recommended!

An event that we first came to the village Mandarfen in St Leonard im Pitztal was because "we would like to find a really nice smaller place without a lot of chater tourists". Really get unwind and relax with good skiing a week. It was a hit, now we have been there 3 years in a row V 11, 12 and 13. Last 2009. Much snow, sunshine and snowy weather every time. The ski area is not that big but has a lot of good backs. Like Rifelsee, which has some red, black slopes where you can also go off next to the slopes. Even a little uphill is available. A mixture of longer and shorter runs. From there you can ski on to the ski area Pitztaler Gletscher with a mixture of red / blue and a little black (in my opinion something for flat skiing some stretches) with the possibility of off-piste skiing on their own or with guide. There is also a freeride camp for those who want to develop their skills.
There are plenty of nice **** hotels with wellness / massage / beauty treatments with 50 to 100 m distance to the lifts or the bus to the glacier.
Our favorite hotel is Wild Spitze, fantastic / superb food and a high-quality wellnes avd with a large number of massages and beauty treatments to choose from.
The price level is very human in terms of housing, as well as on the slopes. Lots of fresh air and beautiful alpine landscape. By lift you reach 3440 m and the village is 1640 m. After skin is nice with good atmosphere but there is no stopover with nightclubs. Here you go for skiing and relaxation.

Pitztal Gletscher is a very cool place to find nice off-piste skiing for the slightly more advanced rider. I'm almost counting on it myself. With Austria's highest lift that goes up to the top of a mountain of 3400m.o.h From here you have a view of the whole of the Alps I would almost believe. Very snow-proof, but have a tendency to sometimes get bad with sneezing. But comes quickly a meter or maybe more. I have been there for two consecutive years v. 45. In the first year, it is wonderful riding, totally superior Swedish backs and nature. With little queues and wonderful rides. The second year (2004) was the extreme year of hot weather and the snow depth was then a meter below normal and mankind of people (especially German and World Cup skiers) who do not care for anything to come first in the cabins. There are great possibilities for snowmobiling, but there are risks of cracks, because it is believed everything is a glacier.
I think, however, that it is a fantastic facility with the perfect Weiss beer after a day on the slopes!

Plus:
Wonderful nature
The height
Fall height (over 600m)
The beer
Good snow

Minus:
Job-like lift queues
Long wait before getting up with the mountain rail
Weather Sensitive
Small capacity fresh possibilities
A lot of Germans everywhere

Whole: Go there if opportunity is given, will not regret you. The pass is however for the high season

Magnus i Villach (Guest)
Note! This text has been translated by Google Translate.
Show original

Even for beginners: Rent a guide one day, turn up the Fraan Glacier to Wildspitze (Austria's 2nd highest mountain 3772 mph) and get blooded teeth on high-heeled turquoise. Stuck yourself here, the first gauntlet with studs in the early 90's. This was my first and a pretty pretty trip. However, it is enough for tourists who want to try. Then it's just going on. Do not forget the guide and go to May / June. Much pleasure.

Was there v14 -04. Stayed in a narrow valley in a small town called Wiese. Ski areas are 3 in a radius of about 1½ mil. Both areas that are not glaciers are really good with lots of red and black pistes. Not a pelican back as far as the eye reaches. Even huge big and good offpist scratches right next to the elevator, so it will be a meter of snow, it's GOLD! we just went on the glacier for half a day because you blew up on the top, but the others who were there the days it was fine says it was a cannon there. The best place I've been to in the Alps. Okay, the village was lucky, but you did not feel like anything else in the evenings than sleeping for so much skiing we went there 14 there is not. Thanks for me! : D

blue_skies
Note! This text has been translated by Google Translate.
Show original

Cool little snow hole that is a bit remote in a side-piece approximately
in the middle between Innsbruck and Zurich. The ski area itself is well
not that very worst, but the mountains around it are
definitely. Incredible area to tour in with how much I'm offpist like
preferably. You can also reach it without further notification. Up to
2000 meters fall height in these scratches. However, the guide is recommended
then it's really the issue of high alpine wilderness and glacier
right outside the piste. Mostly really good with snow. Had myself
one week there in mid-May last year. At height there was how
Melt untouched cold snow on the northern slopes for a week
after last snowfall. Hardly what to expect
mid May ... It is often driven from the top (3400 m)
all the way down to the parking lot at 1800 meters right into the middle
May. How many resorts offer 1600 meters liftservad fall height
so late in the season? Certainly a place to recomend
anyone who wants to seek an "undiscovered" little pillow hole to do one
offpistexpidition to. Lots of ski landscapes usually lie and
nuts on the glacier during the spring, mid and late seasons
There is of course also a lot of ok riding in the piste. Though
hardly because it will suffice to enjoy one for a week. 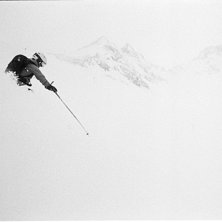 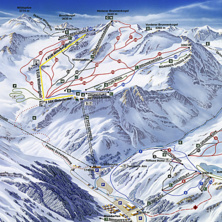