9-days snow forecast from Trollhöjden
What do you think about Trollhöjden?
Write a review
5
4
3
2
1
3.0
1 reviews

Heddious
Note! This text has been translated by Google Translate.
Show original

That it exists at all times in ski slopes in Halland, this rainy, foggy misery to landscapes can be seen as a business. Troll height is a typical example of a local slalom - there is a button lifter that goes faster, the fewer blueberries are in the hill, a wide blue-red hill that is brilliant at the end, and a narrow loop through the woods (which in the summer is probably some kind of way ).
Last winter there were three types of boxes / rails, and three or four jumps of varying sizes along one edge of the hill. In addition to stick training, the Slalom Club also had park training for the kids.
Quite okay if you can not get to a big back. Plus, you can clean your brain there after having a psychological break in Ge-Kås. Just a lot of parents (especially daddy) who have been raging the children there while parent number two is pushed into the shopping cart.

It would probably be a good idea if there were resources .. thinking of my interior hobbyist.

Positive: Well-kept back when there is snow. The club is active and the back is open almost every day in good conditions.

Negative: The hopping ends up a bit afterwards and was roughly icey when I was there, which is not so strange as most people who go there do not jump. 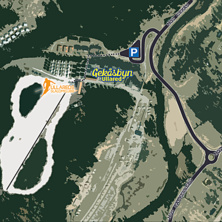