Upstate New York is where sweaty city New Yorkers used to go to escape the city’s notoriously hot and humid summers. Then, they realized that this area was pretty awesome in the winter too. In 1932, Lake Placid hosted the U.S. first winter Olympics. And in 1980, they did it again.

Whiteface Mountain, located in the beautiful mountain town of Wilmington, sits only 13 miles outside of Lake Placid. Whiteface is state-owned, which means that no commercial or residential development is allowed at the base and that the surrounding wilderness can be left unspoilt.

The resort opened in 1958, featuring a massive vertical drop, which beat the vert of any other rivaling resort in the east. Whiteface, the fifth highest peak in the state, actually still got the bragging rights to the biggest vertical drop, east of the Rocky Mountains: 3,430 feet. Vail narrowly gets on top with only 20 vertical feet. The mountain features some of the most technical, varied terrain in the Northeast. Definitely rated expert. And there’s plenty of glade skiing to go around as well. It’s a resort with few distractions, except for the gorgeous views, thanks to a lack of crowds.

If you’re feeling like the potential Olympic gold medal candidate that never came to be, you can ski the slopes where the Olympic giant slalom and downhill events once were held. The Winter Games aside, other classics include Cloudspin and Skyward. We’ll let you fill in the blanks.

Tree lovers ought to go to either Lookout Mountain or Little Whiteface. As so often in the east, the trees stand tall and tight so shred accordingly. For backcountry, the locals recommend Whiteface Slides, which are four narrow, steep chutes. The area is avalanche-prone so only open when the ski patrol deems it safe. On any given cloudy day, the Upper Mountain is a safe bet.

Lap these runs to stay warm, and though the odds are against you, pray that the lift is out of the wind. To ski trees, head to Little Whiteface or Lookout Mountain. The long, tiring gladed sections here aren’t for the faint of heart. Like any wooded terrain back east, the trees are tight and the turns quick.

There’s a free shuttle that runs between Whiteface and Lake Placid, often enough that you don’t have to worry about saving any energy for getting from the slopes to the front door of wherever you’re getting your shut-eye. 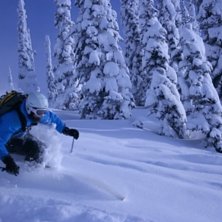 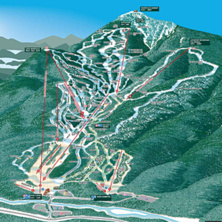