Tomas (Guest)
Note! This text has been translated by Google Translate.
Show original

Instead, go to the German-speaking part of Switzerland or Austria.
In comparison, Zinal is both unnecessary money and time.
Fun to have tried though ...

Been in Zinal and Grimentz a few times during the 90's. Although the ride is quite thorny, I think Arolla is a better option.

MaxK
Note! This text has been translated by Google Translate.
Show original

Thought Zinal had wonderful slopes. Smooth and smooth with some people despite the weekend. It's good that the village is high so it's wintertime.
Stayed however in Grimentz who had worse driving we thought.

hp
Note! This text has been translated by Google Translate.
Show original

Zinal got better than I predicted. Certainly, the pistemaker decided to judge that the fall height was high, but in addition to well-prepared pistes, Zinal offered excellent off-piste skiing.

In Zinal you allow off-piste skiing as long as you have a spade, probe and trance. Then you can go out through a gate that takes one behind the Zinal system itself and gives a ride, partly on the backside and in the green-marked area of ​​the pistemap.

When we were there, of course, the avalanche was right high, a three, which means they do not allow much offpiste. Surely you can cheat and get out on your own. It was a man who did and he died the day after we were there. Sadly, you still have to respect the signs that are set.

To the good. Despite low alert, there are large areas within the actual piste system where you can go a lot of offpiste. The slopes themselves are mostly red and offer nice carvings if you are looking for it. Unfortunately, some of us were there when we were there, but looking a bit and after some slashing we found great nice areas to go on, which despite a few slots before we were very good.

Zinal is definitely an option to spend a day or two. In addition, there are more resorts in the same valley: Grimentz, St Luc (read article in BRANT, 1/2003), Chandolin and Vercorin.
The Valais valley usually offers good skiing and with a minimum of people.

The rating will be three, but with a big plus sign. 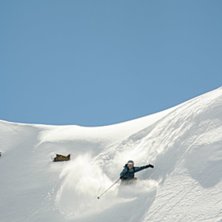