Arabba is a small town in northern Italy, situated in the middle of the Dolomites mountain range. Arabba forms part of the well-known Dolomiti Super Ski area. This gigantic ski circus consists of around 10 villages, more than 450 lifts and there are more than 1,000 piste kilometers to experience and enjoy.

It’s worth mentioning that Arabba is included in the well-known ski tour/ tourist trap Sella Ronda, where several large resorts also form part. The ski tour takes you from village to village and from slope to slope. There are pistes of all difficulty levels. You can try skiing at one of Italy’s highest situated ski areas, Marmolada. Take a lift from Arabba and and reach the glacier that way.

Wily
Note! This text has been translated by Google Translate.
Show original

Arabba the place that has the best location in Sella Ronda. Nothing for those looking for nightlife without this is a small place you live in to go skiing.

Sella Ronda generally has quite nice backs - it is very blue. Then it is good to live in Arabba where there are several nice black slopes on one mountain. You should be able to get down easily for a black hill to enjoy Arabba (if you are looking for a fishing trip, it is probably better to choose another place in the system). You can only say that Sella Ronda is wonderfully beautiful and nice to go skiing in.

still seems to be a good place. Was stuck there in the 70's. It came 2m snow, just over. Then it took three days before the roads were passable again. Me and my mate at that time were basically alone to drive offpiste. Guess if we enjoyed!
Arabba is best in the "super ski dolomiti" if you are looking for skiing. Good place. Have traveled in twenty places in the Alps. Arabba matches most.

Brovo
Note! This text has been translated by Google Translate.
Show original

Maffig check-out in Arabba
24 / 3-09: Arabba, Italy
We came by bus from Innsbruck airport. The tour operator was Lion Alpin. The headmaster Niclas received a professional welcome with a welcome dinner at the city's best pizza place, 7-Sass. Arabba is one of the smallest ski resorts in the Superski area of ​​the Dolomites. The village has about 15 relatively new or newly renovated hotel, a few resturants but at least 3 very good. The most expensive hotel is the Sporthotel Arabba with the Chalet Barbara annex. There we lived 300 m from the village's single lift system, Arabba-Burz.
The weather was top, temperatures around 0 degrees, a lot of snow and amazing slopes in a huge lift system. Niclas was an amazingly helpful guide despite his young years. Lungly and clearly he described slopes and lifts during the backing or during the tours of various interesting alpine peaks, always wishing everyone to be well and happy. In addition, he could point out the best of all dining places with good Italian food. It was a perfect skiing week, just as we wished when we made the reservation.
BUT, the owner of the hotel managed to show his right me right when it was time to check out of the hotel. The bus filled with happy friends after the happy week stood on the street waiting for us to return to Innsbruck. We were at the front desk to pay for the mini-bar and 1.5 hours of surf time on the hotel's guest computer and to get out of the way.
-We have a small problem, says the receptionist, you have used the computer for 72 hours and it costs € 290.
No, I pay for the time I spent 1.5 hours ie € 6.
The receptionist calls on the owner and after a while arrives a brand new silver gray BMW X5. Clock rises a snagged half past fifty with dark sunglasses. He sees that the bus is ready for use. Step into the front desk, take off the glasses and show off two dark eyes that are definitely not friendly. The message was clear - pay! - Yes, six euros I say.
- I am your friend, I'll be nice to you. You only pay half. -NO!
The receptionist gently passes and puts them in a box that she carefully locks. She knows the rules. No passport if the guest does not pay. The friends on the bus are getting impatient. The boss and I for an excited discussion. He accuses me of not having read the instructions (in Italian) before signing in and not logging out correctly. I blame the receptionist who helped me log in and was notified when I was done.
- If you do not pay I call the police, says the boss well aware that the bus must go to fly. -OK, I'm believing he's bluffing.
After ten minutes, two armed police officers arrive in dark blue uniform. They kindly greet the boss and ask us to sit in the reception desk and enter the wardrobe, where the guest computer is standing. I realize that my chances of being judged are diminishing when one of the city's most important bosses locks in with the city police in a scrub. Just bite into the sour apple and pay € 145 to get out the passes and get away.
After a quarter, the police will be released: - You can go. And after comes the boss: -I am sorry, there is an error with the computer.
Sens morale:
• Do not allow the reception to keep the passports until the last day so that you may end up in a hostage situation.
• When using guest computers, make sure you log out clearly or turn off the computer.

Annanda
Note! This text has been translated by Google Translate.
Show original

The little but oh so cute village of Arabba. Have done a season there and we'll see if there will be one more ... think Arabba has it all (there's nowhere to party but it's possible to get to Corvara, where there's really good apron!), Above all wonderful offpiste! Marmolada is a definite favorite, but also Ornella and Val Mesdi. The position of the lift system is perfect. Arabba is an understated city!

Would like to go back. backs for everyone, both blue, red and fine steep blacks ... cozy resturants, arrabba are good at the system, easy to get to other places ... try to go to marmolada!

New lifts up from the village provide non-existent queues. nice resturants on the slopes, great for pizza lovers! price level is good. It feels like Arabba is a place that has not yet really understood how good it is ... a little sleepy no-one after-ski, and nothing for those looking for nightlife.

The food is wonderful and the staff pleasant at all the restaurants we visited.

Tip: Those who like to enjoy a long lunch take whatever restaurant you want on the slopes. All is well!

Tip: You who go to the Alps to party should choose another place.

Been
Note! This text has been translated by Google Translate.
Show original

Awesome cozy city, without nightlife though. A couple of bars and some good restaurants.
Good with snow when we came down, but it had not been snowing in a few weeks, however, the surface of the slopes was very good, they could pee in the Dolomites!

Can recommend Proguide.it if you want to go with a guide. We drove through Valle Mesdi with Fransesco. Up to Sas Pordoi, late traversing / climbing for 50 minutes before the glory manifests itself. The nature on the Sella massif is amazing and after the first steep colouir (40 degrees?), Val Mesdi opens 500 meters of cliff walls all the way down to Colfosco.

PO_ljung
Note! This text has been translated by Google Translate.
Show original

Arabba is definitely my favorite around Sella! for several reasons.
-The location of the village
-If you want to go to the sun, choose the sun side. If you want to go on snow, choose the shadow side.
-All these restaurants on top of the valley etc. The Italians know how to enjoy life.
-The two top lifts that go up to Porto Vescovo take you from 1600-2480m in a smooth and fast way the queues are not a disaster in the high season.
-The slopes are very well preped and varied.
-There are good chances for the Offpist slopes
is partly on the shadow side. (chance to 3/5)
If you take the elevator early in the morning up on the top to Porto Vescovo and head down for the first edge at full speed, keep left on the plate next to the black piste and keep your pace! A short Offpist stretch. Proceed with the reserved speed down the black narrow piste and try to get up / get up at Portados. There is a small opening in the woods where you can drip into a nice lion nest a 200-300m range. Alternatively, go down the Ravine to the right of Portados. Continue Carva all the way down. Do not you have lactic acid in your legs then you're Superman.

The Dolomites are a giant area that takes a lot of time to get a fair review, but it can be said that the area around Sella Ronda is very varied. The slopes are wide and not particularly steep, except for course, but the slopes fit many different categories of skiers. The width makes it easy to maintain high speed without compromising the health of others.

Getting around the massacre Gruppo Sella is a day trip that requires more lifting technique than skiing technology. However, some places on the trip provide natural experiences of rank that weigh the sadness of the button lifts.

When we were there we lived in the village of Canazei, nothing for party suits and some difficulties are found to find the cozy Italian taverns, however, it is easy to find taverns with fluorescent lamps in the roofs ...

If the offpiste can be said that there is much left for us who want it, Italians are not known to seek solitude. Take an early cabin up to Pass Pordoi and enjoy one of the marked off-pistons down, but the south-west trip can be expected until the sun has reached the entrance, otherwise it can be extremely icy and clean by dangerous, high cliffs waiting for the only natural stop !!!

We are happy to return again this winter and hence the grade ...

The most beautiful village in the whole cohesive ski system (four valleys interconnected. The skiing from Porta Vescovo down to the village holds "French class." Can not pronounce on the off-piste because I'm 54 and scared of my knees! 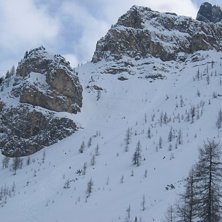 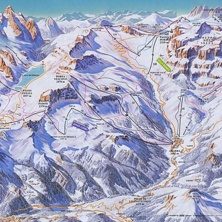