The Alps in all of their glory, but with their distinctive pointy and orange-yellow mountains surrounded by forests and fields, the Dolomites and Val Gardena offer something very special.

Val Gardena does not only offer spectacular surroundings. You have access to the world's largest ski network, which offers an incredible 1220 kilometers of slopes.

A popular road called Sellaronda takes you all the way around the giant ski system and allows you to access four different valleys and three provinces with one single lift pass. The ride is expected to take up to six hours so be sure to keep track of the time as the ski lifts are not open at night.

Of course, Val Gardena also offers the perfect Italian cuisine and with an average of 300 days of sun, there is a great chance to possibly get the classic goggle sunburn.
The large ski system offers skiing for everyone from beginners to the most experienced skiers.

Urban (Guest)
Note! This text has been translated by Google Translate.
Show original

mr_x
Note! This text has been translated by Google Translate.
Show original

Were in Val Gardena Jan / Feb 2017. The snow situation was like that and there was often a bark on the side of the hill. However, the snow cover in the back was blameless. Good long runs. Good pistachio and rarely any longer lift queues. The only time there was a queue to talk about was when we went up to the glacier, Marmolada. If I would give any recommendation it is to visit Marmolada as early as the day it goes. We arrived a little after lunch time and then it was smocked with people on the slopes and very upset. Keep in mind that it takes about 1-2 hours to get to Marmolada if you start in Selva, ie the main town. In general, however, the week was good. There is also the possibility to go on a day trip to Cortina.

One disadvantage is that the slopes closest to the village end up in shadow basically all afternoon due to the large mountain in the middle. If you are looking for sun, St.Ulrich and Ortisei are strongly recommended.

As far as the village is concerned, there is not much to complain about. Good restaurants and close to almost everything. Good food stores too which is of course a plus.

a91_msf
Note! This text has been translated by Google Translate.
Show original

Were there for a couple of days v.7 2013. We did a tour of the alps with beach shacks in Bad Gastein and Val Gardena. Can only agree with the positive reviews written. Fantastic area. Great! Wonderful weather made its way. Very popular = locked queues. Bit of a bit of turmoil when Italians, Russians, including dissatisfied Swedish cuisine. Good mix of red to black (a few blue) slopes in the Sellaronda yard we went. It takes a whole day to go round the yard. If you want to avoid the queues in St. Christina can jump on the Sellaronda yard in Arabba, for example. Despite this, will definitely go back.
+ Landscape (UNESCO World Heritage Site)
+ pistes
+ Weather (more sun-sure than on the north side of the Alps)
+ Size and variation of piste areas.
+ The food (Italian. Not the Tyrol chain closely linked with the uncoated Austrian)
-Köer (Tip: Put in the queue to the first lift up)
-Right expensive for full day cards Dolomiti superski

fritiofsson
Note! This text has been translated by Google Translate.
Show original

Val Gardena is the best place to go! We have chosen Gardena every single year since 1997 and we have never been dissatisfied. We still have pistes left which we have not left. Me and my friend did the season here last year. The slopes are amazing. There's grim skis, you just know where to go. Me and my friend worked in an apré ski bar where it was full speed the whole season. If you are familiar with the choice of Gardena / Dolomites, you do not want to go skiing another stop. The best thing is if you have contacts down there who know everything! So you will get the best trip / season ever !! Do not be afraid to ask or talk to the people they are really nice and super fun.

Kalle (Guest)
Note! This text has been translated by Google Translate.
Show original

Well, as a ski resort, it's very good.
The black backs shine with its absence. So places like StAnton, Tignas, Val dIsere, Val Thorens, are whales. The children aged 11 and 13 also thought the black slopes were clever. They compared with last year in StAnton.

We went by train from Stockholm and down. Actually comparable to the flight. Taking over a day, but if we want to keep the snow in the Alps, it's a climate-savvy alternative. Yes, this is not the case at home here about the place.

Sella Ronda should go and take a detour to Marmolada. We and the family of friends fixed it and they had 2 9-year-olds. Or were they 8 ...?

I can not really judge the offpiste, as there was no snow to go outside the piste. In Austria the same week they had incredible snow. And it was snowing all week. But so it is, you can not always get well.

A friend of mine has been to Canazei, and the disadvantage of that resort is that there is a (1) lift from the village in the morning and it is KÖ! Val Gardena is much better in that way, as they have more lifts up the mountain.

We lived near the hill in a very affordable small apartment hotel. Villa Elvis. Newly refurbished, but cheapest I found via the site's website. However, I would stay in Val Gardena. Threw out 8-10 mail requests in August, got a nap at the cheapest ...
The accommodation is located by ski-in and 150 meters to the lift type. Of which you can walk 100 meters around the city's watercourses.

What makes the grade down is that the black slopes are too few and not so weak ...
For a family of children in this age, it is very good. Even though they thought they were black ...

Calle (Guest)
Note! This text has been translated by Google Translate.
Show original

We have spent a number of years in Val Gardena. Bott both in Selva, Ortisei and St Christina. During the five years we have been there, we have found a new backing every year we did not go in. Perhaps not the most demanding slopes for the boaters but lots of lovely "sals floor" and a number of lovely eateries in the slopes.

There is no one who can beat like the Italians. Incredibly well-maintained slopes and lifts. Minimal queues even though we were there during high season (v.8). In recent years, plenty of snow, but even the years when it was snowy, the slopes are very well prepared.

The teens have no trouble walking themselves and finding exciting places to take fun. We definitely recommend Italy for the nice weather and the beautiful surroundings.

nitor
Note! This text has been translated by Google Translate.
Show original

Was there at week 8 this year and it was quite good of snow which is apparently unusual. It also snowed 3-4 decimeters a week.

Positive was: Not much lift queues, great snow thanks to daily / nightly snowfall, mostly nice downhill runs, good opportunities for off piste because of dito, nice prices in the slopes, very nice views with the beautiful and often vertical cliff walls of the foundation, overall very nice catering at restaurants and by lift staff.

The negative was: Quite busy food down in the village (Selva) except for the pizzas and pasta. Pretty much transport stretches as you move around between the systems.

Cannon! if you like the sun too, because it always shines me. Never like Chamonix but over the years you enjoy sun, beer, backs, o never crowded. Marmolada is not crazy o The beer in Malga Ciapella tastes terrific. Go there in March for the 5th. Svenneling

many good ski slopes. me and my family only had rucksacks
and went around and stayed at different hotels.

johanmarfalt
Note! This text has been translated by Google Translate.
Show original

Dolomiti Super Ski is actually the biggest lift system! a place most for families for it's not so difficult skiing but the Marmoladar roundabout in just over 3000 meters is not the wrong ass ...... 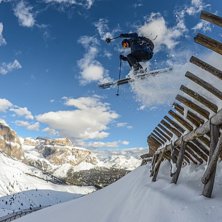 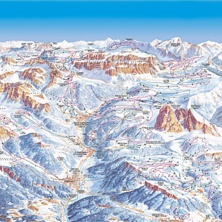