Northern Utah is not the only place in the state where one can experience great snow and winter fun. Southern Utah's Brian Head Resort has offered skiers great alpine skiing since opening its door with one lift back in 1964.

Regional skiers from Utah, southern California, Arizona, and the Las Vegas area can access the ski area off Interstate 15, US Route 89, and Utah Highways 14, 143, and 148. Visitors can fly into Las Vegas or use closer facilities in Cedar City and St. George. Car rides from Vegas will take roughly three hours, while the drive from Cedar City is just over thirty minutes.

The Highest Base in the State

The Brian Head Resort motto "Greatest Snow on Earth" might be a matter of opinion, but guests to the ski area note the skiing elevation and high snowfall amounts as points beyond debate.

The ski resort has the highest base elevation in Utah, sitting at 9,600 feet. Its peak elevation (atop the Giant Steps) stands at 10,970 feet. That makes for a lift-served drop of 1,320 feet and a 1,548-foot verticle for skiers willing to hike it.

The area in and around Brian Head Resort gets 258 days of sun annually, with some form of precipitation on about 103 days each year. Plankers not only have a decent chance to cut first tracks after a dump but also have plenty of opportunities to ski in the bright sunshine.

The Brian Head Resort gets nearly 360 inches of snow falling on the ski area annually, giving rippers and shredders fresh powder to ski on for most of the season. That season starts around the Thanksgiving holiday and lasts well into April. It stays open later than other resorts in the nation, making it a destination for ski bums and a home base for dedicated park rats.

Skiing, Snowboarding, and Tubing, Oh My!

The Brian Head Resort has several double, triple, and high-speed quad lifts for guests to use. Lifties keep things moving along, so there should only be possible delays at the typical peaks around holidays.

There are over 650 acres of snow at Brian Head Resort. With over 70 runs, skiers and boarders will find plenty to do here. About 30-percent of the mountain is rated green for beginners, with the rest divided equally between blue intermediate runs and advanced black diamond terrain. Those new to skiing will want to stay near Navajo Peak for the most fun, with Brian Head Peak attracting the rippers and shredders looking for a challenge.

Brian Head Resort has one terrain park called Bypass. It is rated advanced and offers users plenty of opportunities to land some sick tricks. The terrain in the park is a combination of natural and enhanced features. 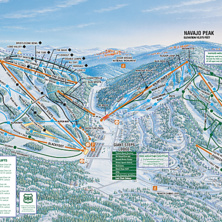