Between 1933 and 1942, work relief programs like the Civilian Conservation Corps built several ski areas across the nation, including the Caberfae Peaks ski resort in Michigan's lower peninsula. The opening in January of 1938 made it one of the earliest ski venues in the country and gave it a decade of growth before places like Boyne Mountain even opened.

Sitting to the west of Cadillac, Michigan, motorists will find US Route 131 closer than using Interstate roadways like I-75. Michigan State Highway 55 exits Cadillac to the west, taking drivers to the resort. Grand Rapid's Gerald R. Ford International Airport is useful for those flying into the region.

Adding to the "Stag's Head"

The Caberfae Peaks ski resort gets its interesting-sounding name from the Gaelic language, from the word for "stag's head." It offers visitors slopeside rooms at the McKenzie Lodge, and off-site options in local communities like Cadillac provide more overnight accommodations. Skiers and snowboarders can fuel up in the facilities at McKenzie or one of the day lodges.

One could say that the Caberfae Peaks was built from the ground up. Starting in the early 1980s, the summit height on the North Peak increased by using loads of fill dirt, which also helped the South Peak open for alpine business. A base elevation of 1,060 feet pairs with a top elevation of 1,545 feet, creating the 485-foot vertical that guests enjoy here.

On top of the improved grounds, the Caberfae Peaks ski area has built several buildings to provide various guest services. A guest services building sits next to the visitor drop-off point, with the ski shop nestled behind it at the base of the slopes. The large building between the two daytime lodges holds the rental center, demo area, and the SnowSports School.

The Caberfae Peaks ski area offers free access to the McKenzie Cross-Country Ski Trail system. These trails are roughly ten miles in length and are groomed regularly by volunteers. Its design challenges all skill levels with green, blue, and black diamond-rated paths. Rental equipment is available from the resort.

Caberfae Peaks has two terrain parks for ski bums to rip and shred through. Cammy's Park is a jump park where guests can land sick tricks and get some air below their planks. Jibber's Park has boxes, rails, and other terrain features that challenge visitors in a fun way.

The Caberfae Peaks ski area hosts alpine racing that locals can enjoy over the season. Children ages 6 through 14 can participate in the Junior Racing Program, while adult park rats can create teams for the Wednesday Night Race League.

Caberfae Peaks receives an average annual snowfall of 140 inches, with 100-percent snowmaking abilities. Much of the terrain here is equipped with lighting for night skiing several times each week. Thirty-four runs cover the 225 skiable acres that break down equally between green newbie runs, blue terrain for intermediates, and black diamond challenges for advanced alpine fun. The resort uses five lifts to shuffle guests around as they explore. 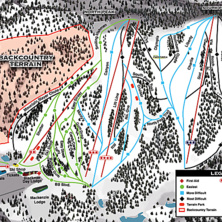