The Eldora Mountain Resort ski area represents the rare winter venues east of the Continental Divide in Colorado. It is one of two (the other Echo Mountain Park near Evergreen) front-range ski resorts still in operation. The resort is also home to Little Hawk, Colorado's oldest working chairlift operating since 1967.

Anyone making the trip by air will want to use the Denver International Airport. Motorists can use either Interstate 25 or I-70 to get into the area. From there, Colorado State Highways 72 or 119 will get you west of Boulder to the small town of Nederland.

Howling Down the Divide

While Colorado is known for its dry climate, parts of the Rocky Mountains receive abundant moisture during the winter months. The Eldora Mountain Resort sits on the eastern slopes of the Divide, gathering an average annual snowfall accumulation of approximately 300 inches. Its location also makes it susceptible to winds, which have shut the resort down in the past for reaching hurricane-force speeds. Colorado is known for fast weather changes, so guests should dress in layers and go from there.

The Eldora Mountain Resort receives lots of snow, but it also has the best snowmaking capabilities. Its groomed terrain is covered 100-percent by equipment. That supplements nature's bounty and provides more consistent skiing and riding all season. That makes this smaller winter venue popular with local park rats and front-range ski bums alike.

Basic amenities are offered on-mountain at a few locations. The Lookout sits atop Bryan Mountain, while the Indian Peaks and Timber lodges rest near the base. Lessons and rentals/tune-ups are available at the Eldora Mountain Resort. Lodging must be secured in nearby Nederland or further down the road in Boulder (a college city that provides everything).

Unlike some ski areas, the Eldora Mountain Resort welcomes those interested in alpine touring, cross country, skiing, snowboarding, and snowshoeing. Since 1962, the resort has expanded to include over 680 skiable acres for guests to explore. The base rests at 9,200 feet, and the peak elevation is at 10,600 feet. Roughly 1,400 feet of verticle awaits visitors to the three peaks and the Corona that make up the Eldora Mountain Resort ski area.

Over 60 named trails are available for skiers and snowboarders to select. Only 17-percent of the mountain has a green rating that beginners can learn on, with less than half (45-percent) rating blue for intermediate skill levels. That leaves 17-percent as black diamond and 20-percent as double diamond ratings for those with advanced and expert abilities.

Those looking for boxes, jumps, rails, and other features to test their skills will find up to eight terrain parks across the Eldora Mountain Resort to test their skills. The features evolve over the season, so there are always new things to try. Almost 25 miles of Nordic skiing trails are also found at the Eldora Mountain Resort, with trail ratings from blue through black diamond to challenge skiers and snowshoers of all abilities. 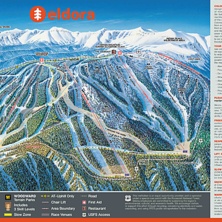