Ompalomp
Note! This text has been translated by Google Translate.
Show original

Sweden's most underrated ski resort! Funäsdalen does not have the best fall height and not many slopes, but the quality of the slopes is divine.

-fallhöjd
-the amount of slopes

With Swedish measurements, it was great. We have a cabin a few miles north of Idre and in recent years have started to drive a lot of north instead of the natural Idre Fjäll. Funäsdalen has many times just passed by on the way to Ramundberget. In Easter 2018, however, we drove 3 days in a row in Funäsdalen (they were the only facility of 8 within a reasonable radius of the cottage that could offer ski school in a long weekend weekend rather than just on weekends). So, afterwards, I have to say that it was a huge win-win.

We had a lot of nice weather with great sunshine and pale nights but with some plus in the air during the days. Of course, it helps to form the perception of the place. But it is a very good ski mountain. Even and consistent fall height with really well-groomed slopes aimed at racing is a good description of Funäsdalen. We have traveled in quite a few places in Sweden, but few of them can offer the same sustained stretch of steep slope in well-dosed slopes, if you do not mind Åre then. But where Åre is a little hopeless because of congestion, Funäsdalen is totally opposed. During an Easter weekend, we hardly experienced any queue at all, neither for parking, food or elevators. That Funäsdalen is also a real "city" with proper shops, system companies etc. And now the gondola from the city side to the top does not make things worse.

The only downside is that there are places that are clearly better if you plan to go next to the piste. However, you go to Ramundberget neighbor instead.

Boogurra (Guest)
Note! This text has been translated by Google Translate.
Show original

Hasse_Lindborg
Note! This text has been translated by Google Translate.
Show original

Come back 2011 after a couple of years in the Alps and what a change! Great refreshment with the slopes, the lifts.

The chair lifts are fast and give you a very good ride time in a short period of time. You can lie and drive laps on laps on laps and get really good and fast driving on the way down. Effective and good.

The gondola ensures that you do not need a car if you live in Funäsdalen. Or do not want to try to find parking up at the valley station. The journey itself down is probably not the best but on the way down lies Bergsgatan 8 which serves a very cool lunch.

The park has always been top notch when I have visited it. Not because I'm the big park ranger, but there's probably something for everyone there.

Conclusion: Well worth a visit if you are in Funäsdalen or in the areas around there.

Slalomåkare (Guest)
Note! This text has been translated by Google Translate.
Show original

I have been there in Funäsdalen at slalom camp and I am satisfied. There are long nice slopes down from the top. The Kawan express lifts are fast and easy to get to the top.

What's a bit worse is that the slopes are slightly crossed and crossed. One thing that's too bad is that I did not try the gondola.

Funäsdalsberget is by far one of the best ski resorts in Sweden! They have amazing slopes that are incredibly good pistades which, according to me, can be downloaded even for beginners and professionals in a good and fun way! The lifts go incredibly fast and there is hardly any queue. They have two parks now that are both amazing as well as beginners can try! Off-piste may not be the best, but if you can go well there is a good offpiste around the nest of the eggs, and even in the upper parts of the mountain there are small forests. If you're tired of funäsdalsberget, because there are not many slopes, Ramundberget and Tänndalen are also very good areas! Really great place!

Comparing Funäsdalsberget with Hammarbybacken and Kungsberget I feel like a joke! The length of the slopes and slope is on a completely different level, and only Åre in Sweden is doing Funäs. Funas and Tänndalen can be compared to Vemdalen and Klövsjö in my opinion.

In the case of snow, there have been two cruel winters with a lot of snow, so it does not matter when he writes that it's snowy ?! In addition, it is statically much more snow proof than most resorts in Sweden.

The night life, on the other hand, I can understand if he is disappointed because it is not possible to compare with ex Åre, Sälen lr Vemdalen, where they have really good afterskis with lots of people. Has a cabin in Ljungdalen itself, so do not think about it, but in Hamra and Ramundberget it feels like there is a bit better drag on Afterskin iaf.

When it comes to buses and getting between the systems it's definitely a bit and the buses are well maybe not very well-developed with mass departures. You can probably count on Car, which probably 99.9% of all mountain tours probably have !? And if you are in the area for a week, it's good with the variation, I think!

Anders-GN
Note! This text has been translated by Google Translate.
Show original

Funäsdalen is a joke! The slopes offered are a longer version of Hammarbybacken for those who are familiar with it, or Kungsberget. To like me, take me out of Stockholm and make it plain, worthless overall experience makes me the strongest advise to go there. Do they have any pistol? Romme is closer and I feel better skiing experience. I can not compare the nightlife as there is no nightlife in Funäsdalen, the first night we were wiped out at 11pm, the second night it was closed, the third evening we were wiped out at 11pm ....... yes you certainly understand I want to come up with this. The proximity to the other ski systems is a mystery to me, it's 20 km to both, Ramundberget and Tänndalen. Buses are safe, but where are they? I do not know because I never saw anyone. Tänndalen is by the way closed at the time of writing, we experienced that bitterly when we got there with skis and wanted to go a bit. The whole area is also very empty on snow, has been for two consecutive years. So would you have thought of going there? Do not do it! save the money instead of something better!

MarkusDanzer
Note! This text has been translated by Google Translate.
Show original

I just came home from a wonderful Easter holiday in Funäsdalsberget. I was there for a week and thought they were an incredibly nice mountain with nice park and cool lift staff, the park is perfectly located by the sun and between trees so they do not blow so much so they are very nice there, the jump is just great for learn tricks and rehearse. Unfortunately, the park lifts stay very often so they get a long queue and the lift staff must get up and fix the lifts that can take 5 minutes. Otherwise, the slopes are nice and good woodland I highly recommend them!

MisterSnowboard (Guest)
Note! This text has been translated by Google Translate.
Show original

I was there for weeks around Christmas 08, thought the ride was generally good, but in the evenings it became viciously fiery and hard.
The Trôt Park (their Funpark) was really good, fun for beginners as well as experts. There were plenty of boxes and rails in different shapes. In the black line there were some sickly beautiful bigjumps as a world-class village. And in the blue line there was hope that was perfect for beginners. Does the park strongly recommend! 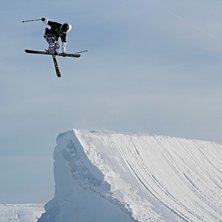 Funäsdalsberget is closed for the season. 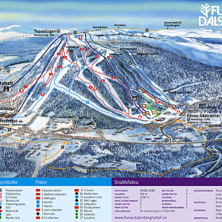