The ski area is smaller than Kläppen, the fall height is only 450 meters, the forest is in some places quite dense and no slope is steeper than normal black. Is it worth going all the way to Japan for that skiing? Of course, if the expectations are the right ones.
Geto Kogen is one of Japan's absolutely snowiest ski resorts. On a normal winter, the snow falls. The snow depth is usually one of the highest in all of Japan every season.
The advantage over, for example, Niseko and Hakuba is that there is not as much competition for loose snow. At two o'clock in the afternoon we could find areas close to the lift that were still COMPLETELY untouched. During non-holiday weekdays, there are plenty of turning rooms. On the weekends, on the other hand, there can be quite a lot of people, as it then floods in day guests who fill the parking lot. There are just over 100 beds right next to the facility, but the number of parking spaces is 1800.
Inbounds, off-piste skiing is limited to a number of treerun areas. When everything is open, there are quite large areas and it is usually possible to find a relatively undetected large part of the day. There are also some nice areas out of boundary, but there you go entirely at your own risk.
For the hiker with skins, the surfaces and drop heights may be a bit limited, but you can find some interesting ones.
The slope of the slopes is consistently perfectly OK, even if it is never so steep that it tickles the stomach. Even the green slopes at the outer edges are clearly decent, with the exception of the traverse at the top. For snowboarders, forest skiing can include some difficult passages past depressions and over crests, but it is still reasonably manageable.
The price level is significantly lower than the large and more famous resorts, but it is also not possible to expect any luxury. The accommodation consists mainly of a dormitory with 88 "sleeping berths", but it is nicer and more private than it sounds. In addition, there are a handful of premium rooms in the facility and a number of other accommodations a few kilometers away. Nightlife, as usual in Japan, is virtually non-existent, except when they occasionally host a Puki Yuki Party. There is no village, but just an all-in-one center facility with more focus on function than charm - but still with a certain style and personality of its own. And of course there is a pleasant onsen bath overlooking the valley and the nearby town of Kitakami.
You go to Geto Kogen above all to experience the Japanese snow. There are usually plenty of them. 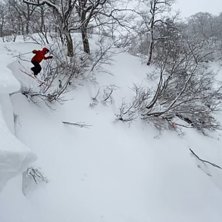