If you’re a ski bum from New York City, chances are that you’re familiar with Hunter Mountain. Located in the gorgeous northern Catskill Mountains, it’s less than a three-hour drive from New York City and Manhattan which makes it an ideal day trip, whether you got your own four wheel or go there with one of the many bus tour operators.

Hunter Mountain Resort consists of three separate mountains: Hunter Mountain, Hunter One, and Hunter West. With 53 trails, 10 lifts, a high elevation of 4025 feet and a 1,600-foot drop, the resort has no trouble soaking up the city crowds. Or pleasing them with its terrific terrain and plentiful amount of snow.

The two brothers Orville and Israel Slutzky founded the Hunter Mountain Ski Resort. But it wasn’t always smooth sailing. To begin with, New York State thought that the mountain was too rocky and jagged to be ski resort material. But the brothers found developers to chip in and fund their dream. Yet, after a couple of initial weak seasons, resulting in huge losses, the developers declared bankruptcy. It was now up to Orville and Israel whether the dream was going to live on. But they kept on, installing a second ski lift and putting their marketing hats on. Yet, it was their snow-making that stood on and drew skiers. By the mid-1960s, the brothers were back in business.

During the Lake Placid 1980 Winter Olympics, there was a snow shortage and the Slutzky brothers were called to the rescue to make sure that the Winter Games could continue as planned.

The New York vibe translates to the runs too. Belt Parkway, which winds off the summit, got its name after the New York City/Queens thoroughfare infamous for its traffic jams. Belt Parkway is actually known for its many collisions among skiers so perhaps stay clear.

Naturally, since it’s literally around the corner from the Big Apple, the weekends tend to get jam-packed. And because of its Herculean snow-making capabilities, Hunter Mountain can withstand pretty much anything that Mother Nature throws at its way.

Much better to time a trip to Hunter midweek. Intermediate and beginner skiers do best at Hunter One. Hunter Mountain, the main face, has an express six-pack chairlift--The Kaatskill Flyer--the first of its kind in the state when it opened. Any experienced shredders will head to Hunter West to seek out some of the steepest double-black diamond runs in the Catskill Mountains.

Stefan Johansson (Guest)
Note! This text has been translated by Google Translate.

I was on Hunter Mountain 2007 and had no big reviews but just to take 2 hours. By car from New York City, it's a very ok getaway for the intense city ... Read more (33 words) 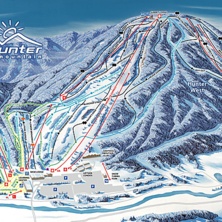