Snow depth
1039 m
185 m
70 cm
Why not try something different from the central European alps and instead visit the Norwegain mountains? Kvitfjell is situated half an hour from Lillehammer and is deemed to be one of the most snow rich and modern ski resorts in Scandinavia.

Kvitfjell tends to always be the resort that opens up first in the season and also the one to close down last. This makes it a very popular place with the professional skiers who want to get down the slopes early in the season. This is where you find Norway’s longest black slope, which runs for 2,900 meters. Having said that, there are a broad range of green pistes that are a bit unusual in that they are wider than normal. The 29 km of runs in total offers something for everyone.

The off-piste area at Kvitfjell has been extended in recent years. Needless to say, there is a terrain park here as well, for anyone who wants to show off with a few tricks.

Erik (Guest)
Great steep slopes with good length. Usually lots of snow. Not many lifts, but few enough people to never have lift lines to speak about. Clearly one of the very best Scandinavian ski resorts for the experienced skier. After new snowfall there are very good freeride opportunities all over the slope area.

jonmel
Note! This text has been translated by Google Translate.
Show original

"Discovered" this ski resort after reading an article on freeride. Booked an accommodation in Lillehammer and departed week 8 with wife and children 18 and 16.
Kvitfjell is a really cool place with good fall height (850m) good pre-paved slopes, many varied fun pistes and no lift queues. Being able to ride a 3000m long black piste with 850m fall height gives you the feeling of great happiness during my 10 minutes it took. Believe that opportunities for good off piste exist when fresh snow is shedding.
The negative is that there are no heating cabins to heat food in, expensive.
Will go here again.

Delfinen
Note! This text has been translated by Google Translate.
Show original

In my opinion, one of the best areas in the Nordic region with proper drop height and relatively large range of slopes, of varying difficulty. Much has happened in the last few years, I noticed in Christmas / New Year 2018/19 when I returned here after about 20 years of absence. Apart from the fact that the area is now much more established, there are a number of nice restaurants on the slopes. For example, try the cozy Tyrihanunun. We combined with skiing in Hafjell because the lift pass applies to both areas. It is also positive and gives more to choose from.

JohanPetter
Note! This text has been translated by Google Translate.
Show original

The combination of nice family backpacks à la Sälen and 850 fall height meter Olympic run-backsback makes Kvitfjell (expressed as some average ...) comparable to Vemdalsskalet / Björnrike. The big difference is that Kvitfjell is a total crowded place Monday-Friday. Not a man in sight - I never saw more than 10 people at the same time during week 11. Thus less ski holiday factory, without biscuits and car racing in the slopes, than Skistar's Swedish resorts. In addition, cheaper accommodation than Sälen and good road from southern and western Sweden. The only drawback is that there is not much space outside the piste to go on.

Robin (Guest)
Note! This text has been translated by Google Translate.
Show original

Where the 2016 sport promise lived in a cozy 8 bed cottage in the village below the mountain, fireplace, 3 bedrooms dishwasher, ski storage, about 80 sq.m. for 6000 kr Thursday to Sunday. Very affordable in my opinion.
Good skiing well prepped and varying backs, snowing a lot when we were there which made forest skiing possible but became awake during the mornings. It was relatively sparse on people and no queues at the lifts at all but the big fall height is in the world cupback and one for transport if you like that. Do not remember exactly fall height but about 300 m on the west side please feel free if I'm wrong. E6 accessible (2 to one way long stretches all the way and there is a possibility to go by train. Most of the restaurants on the slopes held high levels with high prices as expected in Norway

Minus / Development Points
1. Where the cross-country tracks went through the alpine slopes and were badly marked I managed to navigate mistakes twice.
2. In the letter of welcome, I said that I would pick up the key in the hotel up on the mountain train (about 20 min up) it did not matter, but in the fine it was that the reception was below the mountain.
3.The reception staff indicated wrong opening hours at the facility and gave me a map to the cottage that did not match.
4. Pre-booked lift passes were forced to be picked up at a specific place where they sold lift passes.
5. The website is at least substandard and not at all like the competitors it's not mobile. Some features do not work like checking open hours. Information about accommodation is very limited it is ours to search and get an overview

At first glance, it is believed that Norwegian Kvitfjell is yet another insignificant Scandinavian ski resort. But the mountain has a lot of skiing to offer. The resort is reached by car from Gardemoen in two hours or offers the country's only ski-in, ski out train station.

Skis ride on both sides of the mountain and fast six-seat lifts take one to the top where you can choose the side of each track. Skiing is clearly grown when red and black pistes dominate. The storm is cruelly steep. There are plenty of opportunities for the liftburen off piste and several parks for jibbers. The area is known to be well-ventilated in all weather, which we also agree with.

There are unusually many eateries where the Tyrihanstunet stacks a little extra. As usual, Norwegians are not shy. Count 150 kronor for a lunch.

There are many accommodation options at the Mellomstasjon but we stayed at Studio H which lies west of the mountain. Studio H is both designed and functional. A separate lift provides ski in - ski out. However, be sure to shop for food before heading up to cook yourself.

VMtre
Note! This text has been translated by Google Translate.
Show original

Have been there for several years now is clearly satisfied! always good pistachio '!
richly good backs but the park may not be the best but they are improving it now
will be a little better!
think you'll go there if you like quite steep slopes and some people

4800
Note! This text has been translated by Google Translate.
Show original

Pist: OS back for super - G at the Lillehammer races. Those who like fast carving in black slopes get their lightning here. Going incredibly fast. My respect for super-G grew during the stay in Kvittfjell.

Off Pist: The forest fog does not work for hacking. No good snow when we were there. A little sloppy - but it worked well with the board. Nice ride. Snow down to Gudbrantsdalen when I stay there. Not quite plainly apparently according to locals. But very nice ride!

Park: is not a park court. But there was hope for everyone there. Beginners, funds and advanced. I've never really had such a fun weekend in the park like there. Perfect for those who want to jump or want to drive a little bigger. Nice jump with flow and good design that makes you dare to bet. Fun with cross country skiing.

Total: drive to Kvittfjell. Nice place without lift queues. World-class punching. The park is the best I tested. An incredibly fun long weekend on skiing and snowboarding.

dr-telemark
Note! This text has been translated by Google Translate.
Show original

A little question to Alien - have we been in the same place you and I? Do we talk about Kvitfjell on Earth or on another planet?

I just got home after three fantastic days in Kvitfjell. Great well-prepared slopes, so when the first morning, which offered more than 15cm pads in the middle of the piste when the lifts opened. Almost no people so I had to put first, second and third tracks in the same back. Brant, flat, woodland, offpiste, rails, jump and Norway's only permanent ski / boarder crossroads. All I have to oppose is the prices for lunch on the slopes, but on the other hand, the wild burger was the best burger I've eaten in a very long time! BK can throw in the wall!

Kvitfjell is still a young ski resort, in the middle of the growth phase. It will be exciting to see where this mountain takes the road. Great skiing already exists today. And as I said, not a kotte in the back of the week, no lift queue - at all! This weekend, of course, it's a little more, but freeing efficient riding. Full speed down the favorite back and then right up again.

Afterski on Koia must not be missed. Charming place with a nice collection of old snowboards and skis.

Kvitfjell is clearly among the best ski resorts in the north, close to Lillehammer and Hafjell and in addition Kvitfjell offers a really nice off-piste. I drove pillows for three days so the hippos never had to come on.

With a little more affordable places to live, maybe a hostel and some more humane prices for food and drink (all over Norway) would be a five-way across. Now skiing is a fifth, but so far Kvithell is totally rated as a four!

utomjording
Note! This text has been translated by Google Translate.
Show original

Despite a lot of snow, just realize that Kvitfjell is really bad. There is a good back, no offpiste to talk about, no other mountain to go to nearby and by far the flatest lift system that I have ever visited. 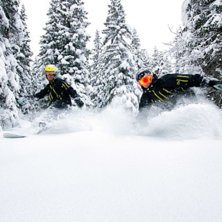 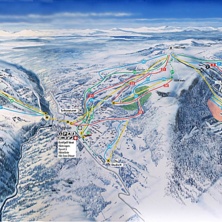