When it comes to first class skiing, spectacular views and varied slopes, there are few ski destinations that are as popular as Madonna di Campiglio. Located at an altitude of 5,000 feet, this ski and spa resort is a must for all ski enthusiasts. Best of all? You can go from the center of the village, ski all day long and then return home - without even taking off your skis. Madonna di Campiglio has 57 lifts and 150 kilometers of ski slopes.

This charming mountain town is known for its beautiful slopes and its wide range of blue, red and black pistes. A fun fact about Madonna di Campiglio is that the ski resort has hosted many alpine competitions over the years. Did you know that Ingemar Stenmark actually got his very first World Cup victory right here? The year was 1974.
Madonna di Campiglio belong to Val di Sole.

Very full of people on the slopes and they completely lack ski! Drive almost over your skis. Yuk!

lanne
Note! This text has been translated by Google Translate.
Show original

Lovely ski resort for those who want good beautiful skiing and have a good meal in the evening. Why I do not give the resort 5 stars is because it lacks the kind of afterski I'm looking for. With 2 seasons in St. Anton (afterskins capital) you are spoiled. Of course there are places to sit down and have a beer and listen to go music, but missing a boo dance on the tables!

Were there on week 8 2016, some snowfall in the terrain, but in the slopes there was plenty of snow. skiing can take place in all the weather, the slopes are well kept and every morning it was nice manchester. In most places there are modern lifts, but at times of the day there are bottlenecks and some waiting.
Looks like there are opportunities for families and adults to enjoy this ski area. Some black slopes are good slope for example from Monte Spinale down towards Madonna, as well as the Tulot 2600m long piste with 900m fall height, leading down to the Pinzolo peninsula.
Other skiers on the slopes should not go too close, rarely look up without turning a lot inexorably, several crashes occurred in our company before we understood to keep double distance .....
We lived in a town of Comezzadura and never visited the village of Madonna di Campiglio so I can not give a review of nightlife etc.
Would love to go there again.

I visited Madonna di Campilio week 12 of 2012 to train offpiste. Spring had come, and there was a bark in the town and in the woods. Snowy rain for two days and then sunshine. First day's rides were on the mountains of Pradalago and Cinque Lagiu. Pretty nice and simple slopes. Pradalago's black pist No. 6 is the one that is best. The Black World Cup piste No. 3 was off. Doss del Sabion during the second day had the same kind of slopes. There are certainly opportunities for offpiste if the availability of snow is better. Third day it was up to Passo Grostè which is the highest point with 2 444 m h. Monte Spinales black 25 was, however, off, but it should be the best piste in the entire system. Started with snow-blown rain and bad sight, after a long lunch, becoming 10-15 cm fresh snow and sunshine. All the slopes were suddenly divine to go in. During the night there was more snow and I was up with the first lift to Passo Grostè. Here in the town the riders were not so focused on the offpiste, so it was completely untouched snow alongside all the slopes. A good offpiste area is under the Petra Grande mountain down to Dosson di Vagliana. The locals call it for Icy Valley. The area at piste 18 in the direction of the resort was also good. The next day it was over to Folgardia and Marileva. The best slopes were the Black No. 1 and No. 25 that went to each place. Both are on the north side and are therefore good at the end of the season. Other nice and slight pistes similar to the first two days of the slopes. If you buy the Superskirama lift pass, you can go to Passo Tonale. The journey takes 45 minutes. There is the possibility of skiing down from 3,000 meters with a fall height of 1,200 meters. When it was late in the season, I did it for two days. Read more about it on that page. Madonna di Campiglio is a long and narrow place, and therefore larger than one believes first. The square is closed for car traffic and there is a pedestrian street where everything is located. Many middle-aged and elderly relax here shopping, as well as nice café and restaurant visits. The nicest venues are Suisse Bar and Hotel Majestic. The nightlife with disco is available on weekends and any day of the week, but it is far from a go-ahead place. The hotels are nice and very reasonably priced. Often have a relax and spa. The restaurants in the slopes are more to stop for a break than enjoy a nice lunch. The exception is FIAT at Monte Spinale which is a cool restaurant with nice design and good food. The resort visited Italian from northern Italy in general and Milan in particular. The international feature was quite small with some Poles and Swedes. One negative is that bus communication to the city is not so well developed.
In summary, the resort has both easy and mid-range skiing. Easy to find opportunities for offpiste with little competition on the snow. The system is well maintained. You can go marginally through the system in a week. A trip to Passo Tonale something for those who not only want to relax. Middle-aged Italians enjoy the sunshine and easy skiing prepared with visits to restaurants and spas, in a lightly luxurious Italian affordable environment. With Passo Tonale included, the score is 4 out of 5. By Börje Hammarling.

ulf1962
Note! This text has been translated by Google Translate.
Show original

Where to go in Val di Sole - Madonna is part of this system v8 2012. The system fits very well for beginners and there are plenty of slopes. Many slow two-chair lifts and several bottlenecks with lots of queues in the afternoons. In several places there is only one lift to take to get back. That the weather was bad with snow does not make the ride better ...
I think that efforts should be made to remove bottlenecks instead of investing in transport cabins for new areas.

per (Guest)
Note! This text has been translated by Google Translate.
Show original

Just returned from a wonderful week in Madonna. Perfect skiing, not a culmination of queues, very well prepared slopes, humane prices for lunch in the slopes. Highly recommended.
also received 70 cm of fresh snow for a day, even handled by everyone who cares for the area.

Gnaget-Micke
Note! This text has been translated by Google Translate.
Show original

Have been in the Madonna area for 3 years in a row now. Good skiing in varied slopes that are well prepared. But these lift queues .. This year it was worse than ever and it's very ineffective in the queues. Something for the lift staff to take care of ?! It is the worst of the passages you have to do if you want to go into the system against Marilleva / Folgarida. In these passages, the lifts are not up to date at all. Another drawback is that down to these lifts, it is often quite "difficult" brant which causes people to collapse where people are scattered throughout the hill. Otherwise, there is a canoeing area with good dining places that are not very expensive if you look a bit. Nice atmosphere everywhere and great sun chances. So you just want to soak up and enjoy varied rides in moderately difficult slopes and can take a little queue, this is a canon field.

- Much people and elevator queues

Just want to leave the lift card (which you still can not leave on your way home) in boxes marked with a red heart and the text "IO SCIO COL CUORE", which is a little everywhere in the village. Then, the whole pledge (five euros) goes to charity. The municipality and local business community is behind the collection going to a local organization active in Burma. Rather than throwing mortar cans in the garbage, but put them short-term instead.

Erlingfors
Note! This text has been translated by Google Translate.
Show original

Hello! We went down to Madonna v.14 (2008). We stayed at Marileva 1400m which was a major tourist residence, no further place if you do not just have to go to sleep. We were lucky that snow came over them for the first two days, because there was some snow in some places. The skiing was really good, I think both in the piste and in the offpiste. It's worth going up when the elevator opens if you want them really nice snowy rides. It was easy to get around with the lifts in the systems, the lifts were often very small (often 2-3 seat lifts). What surprised me a lot was that most of them were beginners. When you saw some who looked a bit better, they were Swedes.

The Madonna di Campiglio village was cozy and compact. As usual, there were almost only really expensive shops, with occasional souvenirs.

The offpiste I think was really good in part. It was almost only we who went offpiste felt like, so you had plenty of pillows to move on.

+ Ride for them most.

+ When it's newly typed, the slopes hold high grade.

Summary: A good ski resort in the Alps that keeps a good class. 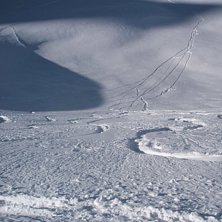 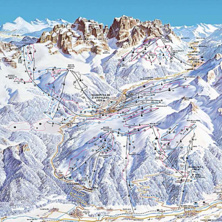