If you like to experience classic Italian culture and also ski on some really great slopes, then Bormio is your kind of place. The town, or village rather, is located far up in northern Italy just next to the Swiss border. The village has a lot of history and old areas, perfect for those who want to do more than just ski during a skiing holiday.

This little ski resort doesn’t really impress on the map, but a map does not present a fair picture. Once you have familiarized yourself with the village and its charming little streets and lanes, and done a bit of skiing, you will instantly fall in love with Bormio. Take the lift up to the top and you have a vertical drop of about 1,800 meters. Do yourself a favor and visit Bormio to experience great skiing combined with genuine Italian culture. Many of Italy’s best skiers and coaches have their origins in this little town.
Bormio includes the ski resorts Santa Caterina Valfurva

Øyvind Grønlie Olsen (Guest)
A hospitality I've never experienced before. Stayed at Hotel Cristallo for the weekend 7th to teh 11th of February. Excellent conditions in the slopes, and not too crowdy. The scenery was breathtaking. A place I will recommend to all my entusiastic ski-friends

Best ever, there is no better alpine, food and environment.

Bormio is a place with well-prepared slopes in a well-known Italian way. It was sunny weather all week and off season during my visit week 4. Snowfall had made it out of the slopes where the snow was hard and windy and sometimes the grass emerged. Therefore, there was no off-piste race.

Bormio consists of three unlinked ski systems. To the main system in Bormio, only by taking the cabin up to Bormio 2000 (meter), and then on to the next cabin or with any of the lifts up to Bormio 3000 (meter). Almost all of the slopes are blue or red. The upper part had less artificial snow so that's why most of the rides occurred here. Offpiste skiing areas are marked on the ski map. Bormio 2000 is the venue for all activities where the large concrete box has a nice restaurant.

Santa Caterina is the second largest of Bormio's ski system and is about 30 minutes from Bromio. The system has an egg lift which takes up to 2725 m via an intermediate station. There is also a chair lift up from the resort. The upper part consists of a northern side where the crossroads used for the World Cup 2016 are located. One of the longer slopes during the racing season. A really good piste. Narrow at the beginning and then get something broader. The southern side consists of a large beautiful and unspoilt white with some slopes in between. Here is the possibility of off-piste skiing. Here is the famous Sunny Vally restaurant, which dominates the restaurant life in its system. A beautiful building in American cabinet with good food.

San Colombano is the third part of the system and is smaller than the rest. In addition, some of the lifts were suspended there, so I never visited that part. One of the days I went to the Livigno neighboring town for skiing and duty free ski equipment purchases. Bormio is an old town where four valleys meet. There is a pedestrian street in the middle of the city with many surrounding beautiful older houses. In Bormio there are also hot springs where the most famous is Bagni Vecchi, which has history from Roman times.

In summary, Bormio is snow proof in the slopes but not outside. Suitable for easier and medium skiing. A smaller ski system that allows you to take a day trip to the Livigno neighboring area for skiing. Genuine nice Italian feel mostly with most Italian visitors. An affordable place without big nightlife. By Börje Hammarling

a91_msf
Note! This text has been translated by Google Translate.
Show original

Was there week 9, 2014. Can only agree with the previous review's review and description. Stayed at a small family-run hotel, Meublè Della Contea, 10 minutes walk from the lift station. Backs with stunning manchester, lovely carving surfaces. Unfortunately, we did not use the entire ski pass - Livigno, we will discover another time. We'll be back here. The only thing I missed was a little Italian height on the food.

Fredrik (Guest)
Note! This text has been translated by Google Translate.
Show original

The system is small in terms of number of lifts and slopes. But it is high-altitude and has wide expanses. In addition, very varied rides in different types of slopes. Lots of untouched snowmobile just outside the slopes because very few seem to go off-piste here. Very good pistachio - manchester production is an Italian paradigm. In addition, an impressive fall height, 1800 meters, if you travel from the top down to the village. No lift queues. In other words, a much better ski area than you would expect spontaneously when you see the pistemap.

We sportsmen know that you have run many alpine competitions in Bormio. Among other things, Jonas Nilsson took gold in the World Cup slalom in 1985, so we Swedes can go straight in the back.

An important plus is also the village of Bormio, or rather the city. It is an old town with Roman baths and narrow alleys and a square where a lovely city party is held on monday evenings. Bormio is old and tired. Instead, call it rather patina, because it's a wonderful city! Historic feeling everywhere. Not a lot of tourists - some Russians but no Swedes more than we. This is an Italian city with a beautiful ski area rather than a ski resort (if you understand what I mean). Do not go here if you want to curl, listen to the untidy coverband on after-ski, find restaurant menus in Swedish etc. Get here if you want a skiing holiday with a lot of feeling and a lot of sunshine, in a city with a lot of soul.

Be sure to go to Livigno over a day. Take a bus or put on snow chains on the car, because you have to go for advanced serpentine roads and pass two high passes. More spectacular road is hard to find. Only the bus / bus journey between Bormio and Livigno is worth every euro and minute. It is no more than 3.5 miles between the resorts, but expect the journey takes more than an hour.

For the long skier there are nice trails in Santa Caterina, 1730 m. H. These tracks have been used in world cup competitions. Watch out for the high altitude trunk before the Vasaloppet;)

I hesitated between final grades 4 and 5 because Bormio is not the world's most powerful ski area just. But that's enough, and everything else in this city motivates a top grade.

Robertblomquist
Note! This text has been translated by Google Translate.
Show original

The first family trip to the Alps went here just this year. Perfect for the family in such a way that you always come down to the same place, it's just a mountain. I like the fall height and slope, both of which are sufficient. Bormio is, in my opinion, focused on classical rowing, you have had the World Cup 85 & 05, for example. All slopes were hard pissed every morning when I was there. Just choose SL or GS and out in the back drive hard. There are nice offpist surfaces near the elevator, and what I could see even a bit longer scratches. Unfortunately, the snow was not good for such a ride, and in addition I was quite alone and then it would be difficult to explore that bit. The system could have been bigger, my 4 ski days were probably right. But you can buy ski passes that apply to the neighboring systems, "Oga" was fine in the sun when Bormio was in the shadow, "Santa Catarina" glanced elsewhere. If you get there one day: Drink the local wine, taste the famous cheese, grind the steel edges on the racing layer and drive hard.

Ps, they have their own yogurt, "Borm-yo", finfin for breakfast.

Bormio is about 2.5 hours by car from Bergamo Airport and the road is convenient.
At first glance, the lift system looks small but is also good for a longer stay. Well-planned and fast chairlifts make the ride more than long. I would probably denote the ride as an average and would probably not bring the smallest children or beginners even though slender pistes are available. The village is model bigger, feels very genuine and all you need is there.

Have been there 5 weeks in a row. Even though it has been hot when I've been there, the slopes have been really good and the weather has been a cannon. The slopes are long, and it takes half a day to get down: P
Bormio, a small small town, located in a valley where the sun sets itself down. A real cannon place even for families. 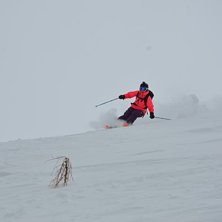 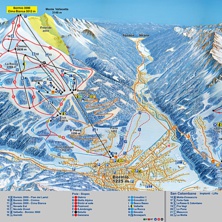