OneMag (Guest)
Note! This text has been translated by Google Translate.
Show original

It became 3 days' rally at the beginning of March 2017 in Scuol (pronounced "Skwå'all" on rätoromansh). Beautifully Swiss with mountain railway and train station next to each other and downhill all the way down. The system is called Motta Naluns and has a high ridge and a steep drop height but a rather small system. However, it offers nice driving 2-3 days.
You can go down to the two small neighboring towns of Ftan and Sent. From Ftan, it lifts back into the system. The so-called Traumpiste (Dreamwoman :) who leads down to Sent from Salavina is a fantastic fine and long ride with the well-needed and goa Sömi bar halfway down. The need to take the bus back to Scuol is definitely worth it. The ride is a perfect end to the day.
Plenty of space in the slopes that week. No tourists what I could see, but only Swiss who were surprised to see Swedes there.

Do not stay on top Champatsch due to bad weather. Lovely easy-to-reach and very easy off-piste between the black slopes below Mot da Ri and also at the red downhill below Salavina. Skip pistol 19/20.
Fantastic beautiful adjacent mountains to view when you go. Mediocre but nice little after-ski by the mountain railway.

Cozy city with Romanian culture. Ok number and selection of shops and restaurants. Flashy bathhouse. Nice little cobblestone square with wells that offered fresh spring water from the mountains. Beautifully decorated stone house (the village / valley was said to be graffiti's origin). Finding cheap accommodation is hard enough. We chose to stay at airbnb.
Recommending the Trais Portas restaurant which is located in an alley above the main street and want to eat a very good pizza at an affordable price, the Taverna works next to one of the department stores on the main street.

Scuol is a genuine city located a bit far in southeastern Switzerland. On your trip there pass Klosters. Here you go over a romantic weekend or for a day trip. 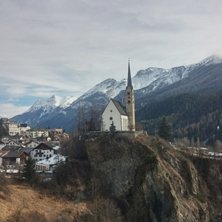