anna (Guest)
Note! This text has been translated by Google Translate.
Show original

Jobed the season 09 at Coronet.

-There are 7 lifts (not 5 or 6), three of which are meant for more advanced driving.
-The climate is hot and rarely falls below 2-3 degrees during the day. (Coldest morning the whole season was -7). It will be a bit like spring skiing throughout the winter ..
The park is unfortunately no longer (all this has been moved to Remarks on the other side of the valley). There are, however, lots of beautiful natural features all over the Coronet (and you do not have to park the park)!
-Backcountry-Running is available and is ok with regard to the options. (If you want untouched pads in nz you should have a helicopter that can take you to it.)
-Coronet Peak is the most commercial place in the country and has therefore been able to invest in an army of snow cannons, thus relatively snow-proof.
"Many people experience the flagship Coronet as a bit stiff and styled, while it's a bit more laid back at Remarks. The lifeguards can get sick sometimes (July specially). Many aussies and asians in the summer.
The backpacks are clearly steeper and more challenging here than on the sister's hill. Though it's hard to find any longer slopes.

You do not really go to nz for the crazy powder, but it's stunningly beautiful and the second option was to sit home and enjoy the summer heat!

Are you there for a whole winter? be sure to get around to other systems! Cardrona and TC are one hour away. Had an epic day at Ohau. Everything is right next to each other, you only need a be and some beautiful beats.

When it does not snow, make sure to do like the Japanese; hang in the park. Developed very technically and in the park down there. Had a great season at Coronet and in Queenstown!

lapprackarn
Note! This text has been translated by Google Translate.
Show original

Worked at the Coronet Peak season 2001 and was surprised by the amount of people who came there and went. The nearest city is one of the world's largest adventure towns, Queenstown with its bungyjump places and jetboating as well as paragliding and other strange adrenaline picks. Everyone comes to Quuenstown in any way. Via Kiwi Expirience or by flying there, some Australian companies arrange direct flights. This means that in the facilities near Queenstown, there will be a lot of people. If you work at the ski school like I did, you can do a lot of work. One day we had 1200 people who went some kind of course with us. This means that the slopes are torn hard and as the manger above wrote, it becomes easily sloppy, partly because the plant is low and partly because people are on the snow. Imagine Åre an Easter!
If you want to sit and drink Latte in the cafe, it's the top of the Coronet, but if you want to go offpiste, I recommend any Clubfields, Mt Hutt or Remarkables, which is Queenston's sister facility. One can find untouched snow if you go to the top of the quad chair lift to the lookout tower and then drop down on the right side.
The park is usually less because Remarkables has a park and Coronet has halfpipes.
There are awesome rocks and rocks as well as other natural kickers around the coronet so you have a good day with good bass and snowy snow, so they can not go wrong, then you shiver in the bowl and go out on a bowl or drain. There is a lot to discover and I will of course return.

peterlore
Note! This text has been translated by Google Translate.
Show original

Coronet Peak is 20-30 minutes by car from Queenstown. The plant is also known as "Concrete Peak", because the snow is heated during the day and freezes to ice during the night, so remember the wrist guards ... But when the Coronet has a pudding snow, it's rocking it! With your lovely hills and natural halfpipes you can enjoy the most fun here. We had 70 cm freshly-used pillows and not a second queue.
There are 5 lifts, one of which is a fast 4-chair lift (other than NZ) that quickly takes you to the top and it's the only place in New Zealand to have night skiing ...

The snowboard park is nothing to cheers over, but there are two pipes that can be in good condition. Otherwise, there are no problems finding sick drops or natural kickers in the area.
Suit for high season as there are long waiting times at the lifts, then stick to the so-called club fields instead. They are an experience in itself.

If you want to combine skiing with party then Queenstown is the best option on these two islands but are you looking for off the beaten track then you're totally wrong.
Choice bridge! 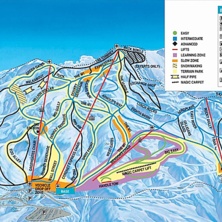