CrustyMetz
Note! This text has been translated by Google Translate.
Show original

One of the country's best resorts, around Queenstown, skiing is ok but cries of tourists, especially Japanese. More worth and cheaper to get here. The offpiste is awesome, awesome spaces to ride on. had just arrived 70 cm sneezing when we were there, and a week after they continued easily and found untouched yesterday ... mthutt helliskii has the best tours on NZ, 8 days a day you can spend about 4500 o they e easily worth it.

Were there one day during a backpacking trip around the world. It was the first day that the place was open so the ride was quite a bit of money. But it was fun as a fan after many months of diving, surfing and sun. Stayed at a crap good place with fireplace.

lapprackarn
Note! This text has been translated by Google Translate.
Show original

Jobed at Mt Hutt as a school teacher in the year 2000. Called from Sweden and got the answer that I was accepted at the beginning of May. Went there in May and then managed to settle housing and bank accounts in Methven. Picturesque little bunching hole with cozy pubs like, The Blue Pub and Steelworx. The mountain was quite ok and among the highest in New Zealand. Hence the snow is a little drier than the lower plants. The big difference to Sweden is that you can not go skiing to the bottom of the mountain but have to transport about 40 min from the nearest town, as in this case, Methven.
The roads up are among the funniest and most scary ones. Many death crashes when people cut off the road without fence and perform the steep mountain wall.
NZSKI.COM, which owns the Coronet Peak, The Remarkables downstairs in Queenstown and Mt Hutt, invests heavily in parks and New School skiing and boarding. There are terrain park people who go around and make sure there are safe jumps and rails. Pistachio every night.
The slopes are also well-prepared but a warning if you go there early in the season are often worse than Kungsberget in December. But when the asian rainforests begin to spin over the island, they dump easily 50cm in one night. I participated in 2m in 3 days in August 2000. Another phenomenon is the blow which causes the plant to be closed for blowing 20-40 m / s. The kids blow down the parking lot from the children's back.
Looking up at Mt Hutt, you see the east and west sides of the island and you see the sea on both sides. Very cool experience. There are also plenty of natural ravines and large areas for off-piste skiing at Mt Hutt. The terrain is often steep and advanced while the slopes are of varied terrain. Visit www.nzski.com for more information! I highly recommend Mt Hutt!

which is 1h from Christchurch, where the South Denmark International Airport is located. 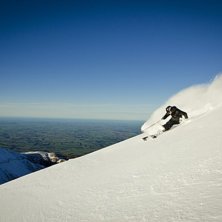 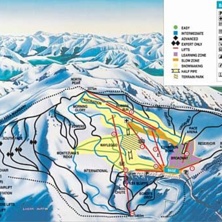