Long before the ski area changed its name to Snow King in 1938, locals had enjoyed the alpine fun that the "town hill" provided them. Located in downtown Jackson, Wyoming, the Snow King Mountain resort was the state's first ski area. From December through late March, the summer/winter resort provides plenty for snow hounds to do.

Interstate travelers will find I-15 in Idaho and I-80 to the south the best routes to get into the region. Motorists will eventually end up on US Route 191 to get into Jackson, south of the Grand Teton National Park. Salt Lake City International Airport is the closest facility handling international flights (a six-hour drive), so guests might find one of the smaller regional facilities easier.

The Snow King Mountain resort is adjacent to the downtown area, making for a spectacular view from both perspectives. That would make slopeside amenities unnecessary in most cases, but with so much winter fun offered here, some facilities are a must. Dining options include King's Grill and King's Cafe, while ski-in/out lodging is available at the resort hotel. Snow King's Mountain Sports has enough equipment to serve all three ski resorts in Jackson Hole.

One of the few times you might find things a bit crowded here is during the World Championship Snowmobile Hill Climb that the Snow King Mountain resort hosts often. Outside of that event, the slopes are usually smaller and made up of local park rats and regional ski bums in the know. There are plenty of folks visiting for the Alpine Ski Race Training, and Snow King Mountain has an Uphill policy that attracts those wanting to carve their path through the pow. King's Tubes lets children of all ages snow tube down the chutes, while the Winter Cowboy Coaster and Scenic Gondola Rides offer a break from the snow.

Growing with the Times

Expansions on Snow King Mountain are drawing interest in skiing and riding the Jackson Hole valley. The winter venue offers 400 acres of skiable terrain for guests to enjoy. With a base sitting at 6,237 feet and a summit height of 7,808 feet, skiers and snowboarders have a 1,571-foot vertical to find potentials down.

There are 32 ski runs at Snow King Mountain, with roughly half the mountain made for advanced or expert skiers and riders to challenge. Over 40-percent of the trails are rated as black diamond, with about 18-percent rating at a double diamond. Roughly one-quarter of the mountain is blue ratings for intermediate skills, and the remaining 18-percent is rated green for newbies to learn on.

There are two terrain parks at the Snow King Mountain resort, with features that rank as intermediate and above. Beginners can find some terrain to rip or shred at the Base Area Rail Park, but Old Man's Flats Park is for those with at least some experience. Snow King Mountain has double, triple, and quad chairs, along with two magic carpets that make the lift system here. 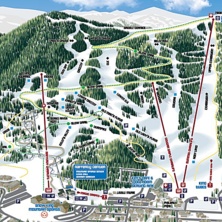