The Eastern Sierra Nevada Mountains are home to several places worth exploring, and June Mountain is one of those destinations. Located southeast of Yosemite National Park, this California ski destination sits near June Lake.

Anyone looking to visit the ski area can use US Highway 395 to get into the region. From there, California 158 will provide direct access to the mountain. Fliers can make use of the Reno/Tahoe International Airport and then drive approximately three hours or make use of Mammoth Yosemite Airport before roughly 30-minutes of drive time.

The June Mountain bills itself as "California's Family Mountain." Factors reinforcing that nickname include the beginner-friendly terrain and the casual vibe local park rats and visitors exude.

Skiers and snowboarders enjoy a season that starts in December and goes through April. During that time, the ski resort receives an average snowfall amount near 250 inches annually.

June Lake has a warm-summer Mediterranean climate, which equates to mild but wet winters here. Plankers will have plenty of chances to rip or shred during a dump but will likely not freeze while doing it. It hosted the 2006 California Winter Games and received upgrades to snowmaking and other equipment around 2012.

June Mountain has an uphill capacity of 10,000 guests each hour. Rippers and shredders will not experience wait lines except during peak days around holidays, however. It uses seven lifts, including a magic carpet, that keep lifties busy through the day.

The June Mountain ski area consists of two mountains. One is the namesake peak, and the other is Rainbow mountain. Intermediates will find most of the blue-rated runs on Rainbow, with June holding all of the black diamond trails. That does allow casual family skiing and boarding in one area and bombers to fly down chutes in another part of the resort.

A system of 41 named trails exists at the June Mountain ski area. The longest of these is Silverado, at two miles in length. June Mountain also maintains multiple terrain parks for its visitors to enjoy.

Bucky's Playground is an introductory terrain park that focuses on a planker's progression. Natural and enhanced terrain provides plenty of boxes, jumps, and rails for newbies to master.

June Mountain also has the Surprise Fun Zone. Casual flowing berms, rollers, and snow spines groomed in a border cross-style offer fun for guests outside of the runs. Visitors to the ski area will find plenty of amenities at the June Meadows Chalet or The Lunchbox. That includes drinks, food, and restrooms. 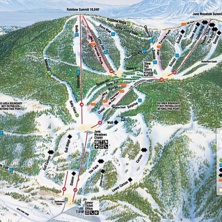