This low-key jewel sits within the Sierra National Forest, northeast of Fresno in central California. Established in 1958, this locally-owned, mid-size mountain doesn’t draw the same glitzy crowds as the other ski resorts around Lake Tahoe do. For instance, the owner Tim Cohee recently fixed up a T-bar that definitely wasn’t up for retiring. Let’s just say old-school skiing isn’t out of place here.

That doesn’t mean that the ski resort is out-dated. On the contrary, it has a halfpipe and three terrain parks: the Ridge, the Canyonlands and Tollhouse Park - with the later being the most challenging one. The freestyle terrain is considered among the best in the state. There’s also a complete mix of jumps and jibs (e.g. many custom-made rails).

China Peak is one of California’s highest mountains, sporting a summit elevation of 8,700 feet and a base elevation of 7,000 feet. With more than 1,400 skiable acres, the resort boasts jaw-dropping views of Huntington Lake.

In the early 1980s, Snow Summit company bought the resort and renamed it to Sierra Summit. Then, in 2010, it was sold again and went back to having its original name, China Peak.

With a Powder Alliance season pass, you’ll get three days of free skiing. Cha-ching. What’s more you can park overnight in one of the 16 designated spots. But you’ll need to book a spot ahead of time.

To get here, you can fly into Fresno Yosemite International Airport (FAT), which is 1 ½ hours drive from China Peak. From the San Francisco/Bay area it’s a bit longer, about four hours. 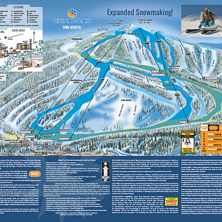