Snow depth
860 m
557 m
105 cm
There is a snowman at the top of Gustavsbacken. The mascot gives a hint of what type of ski resort Lindvallen is. This is a place for kids to enjoy and the steepness of the slopes, or lack thereof, reflects this. This is where you find Sweden’s only “ski in – ski out” McDonalds.

Lindvallen shares its lift system with Högfjället and they have 48 lifts and 51 pistes together.

The highest vertical drop is 303 meters and the longest slope is 2,500 meters. Most pistes are green. There are 31 of them and 40 km of runs in total.

Kids are in the focus at Lindvallen, where you'll find Sweden’s largest family ski area. There are only three black pistes here, while you can count as many as 24 green slopes.

Most slopes have the same layout and do not offer a great deal of variety. There are a few tedious transfer routes, but also an efficient 8-chair lift that swiftly transports people up the hill and prevents long queues from forming.

Lindvallen is a perfect choice for a family ski holiday.

Wrider (Guest)
Note! This text has been translated by Google Translate.
Show original

Olivia (Guest)
Note! This text has been translated by Google Translate.
Show original

The first impression on the accommodation was not good. It was full of pollen and dust on the bedside table and two spiders ran around the room. Also spider web in the corner of two of three rooms. The kitchen is okay, not much to complain about. The room curtains were also filled with pollen. Of course, this is not a problem for non-pollen allergy sufferers, but for those who are this it became a direct minus point. We also did vacuum cleaning ourselves when it wasn't done. The toilets are good; there are toilet paper and a well-functioning shower etc.

AmyBoswood
Note! This text has been translated by Google Translate.
Show original

Lindvallen is a ski resort located in Sälen. When you buy a ski pass in Lindvallen you can use it in several other areas.

My first impression of Lindvallen was that there was so much to do! There is a McDonald's restaurant, water park, bowling and several shops and restaurants.

We were in Lindvallen late in the season but the slopes were nice. There is a variety of slopes with different difficulty levels.

One can resemble Lindvallen at Vemdalen since both are ski resorts that consist of several different facilities. The difference is that there is much more to do in Lindvallen besides skiing.

My kids appreciated the pool and the bowling very much and it even made us adults. One disadvantage of all the extra activities is that it can take focus from the skiing itself.

I thought that Lindvallen was very affordable especially because one could use the ski pass in several different facilities.

Minus
- not as "cozy" as other similar resorts

Noine (Guest)
Note! This text has been translated by Google Translate.
Show original

The skiers in the family say 3, the snowboarders say 1. Incredibly tough transport distances, they often stop uphill. Blowing a lot, and the Experiumlift does not cope with wind, which means that it must then be kept closed and build huge queues at the lifts around. The snowboarders also saw the large amount of button lifts, but think the park is okay. Prices are unjustifiably high, you can get much more bang for the buck elsewhere.

JessicaMcGlynn
Note! This text has been translated by Google Translate.
Show original

We spent week 2 up in Lindvallen with our boys 6 and 8 years old. Good range of slopes for families with children beginners as experienced. We took the opportunity to visit Högfjället, Tandådalen and Hundfjället. Hundfjället and its troll forest were very much appreciated by both parents and children. Fun jumps in the woods, music and amazingly fine wood trolls to look for in the forest. We also stayed in the evening cover when lights and music made the forest magical and justly creepy. Tandådalen had many fun slopes which unfortunately were not explored enough due to strong winds that closed the lifts. Högfjället was probably the crossing from Lindvallen the most fun, well there it was windy and icy so we took the bus back to Lindvallen instead. Lindvallen has a good range of activities! We took a bathing pass all week, so after we were out on the slopes all day, we slipped home and caressed the food that was ready in the electric kettle, and went to Experium's water park. Great to be able to swim outdoors in the warm pool and cool slides.
Mom and dad are very happy with green, blue and red slopes so Lindvallen was perfect for us. The children appreciated the trix park, Valles show and also the biscuit chocolate hunt. There was a flushed ice to skate on at the seal square, you could borrow skates. It was a successful week in a beautiful mountain environment! It is for a reason that Sälen is a popular winter destination!

Tobbe999
Note! This text has been translated by Google Translate.
Show original

Not the world's coolest skiing, but works for a short weekend or a week with the kids. Much to do around the slopes for those who may not ski. Good, super nice bath house, but expensive.

Good ski school and nice lift hosts. Good with the donkey for families with children.

Ninni (Guest)
Note! This text has been translated by Google Translate.
Show original

Ski school and teachers very nice.
But no gondolas or seat lifts with protection - and it blows mkt! Expensive !!
Our townhouse on Vintervägen is a real building! Flaked paint on walls and windows, draughty. Everything of the lowest quality. Gabon doors worn, responsive. Untidy !!

Too bad that they do not pistes every day so it is under all criticism. The question is whether you can claim money back on the lift card.

Rickard (Guest)
Note! This text has been translated by Google Translate.
Show original

+ nice and good staff throughout Sälen
- / + full everywhere in restaurants and apres ski
- poor lift system considering the number of visitors. Build more chair lifts!
- quickly gets up
- poor variety on slopes
- no terrain to talk about
- Terribly expensive for what you get
- constantly windy
- a lot of children and beginners

This year the ski trip went to Lindvallen / Högfjället and the accommodation Skistar Lodge. We usually go to Hemsedal, but because we now have a little 18 month boy we thought he has more to do in Sälen with a bath etc. Activities beyond the skiing itself, Sälen is probably the strongest card and there is really something for everyone.

Skis Lodge !!!
I have to say that Skistar Lodge Lindvallen is the best accommodation we ever had. Experium's entire experience without even wearing shoes or outerwear. The kids were out o playing in the corridors outside the apartment, them as well as found each other naturally. When they were then sucked on chocolate or snacks they just said the room number in the restaurant, so they were served and it was written on the note paid at check out.

The skis and boots were put in a changing room that was locked up with the hotel card, so you never had to have a lot of stuff standing in the apartment. After taking all the ski outings, the lifts were just outside the door. There lies Valleland and the children's area, we adults (and little bigger children) could immediately take the elevator to the top about 100 meters to the left.

So all in all, it's probably the best skiing holiday we have had, the kids never want to live anywhere else and we all were happy.

PS, the snow depth was 130cm did not matter. 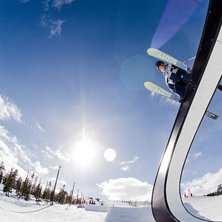 Lindvallen/Högfjället is open for season.