Snow depth
853 m
483 m
60 cm
Stöten, located in Sälen, is a well-traveled destination among families with children and those who are not interested in off-piste skiing. With long, fun, mostly blue slopes, this is the place for those who may only go skiing one week out of the year. It is easy to find what you are looking for in the system and there are not too many lines. Many skiers who enjoy going on-piste love the rolling slopes, and the very wide main slope is definitely a favorite. The end of the slope forms a natural square where you can find nice after-ski restaurants. This snow square also becomes a natural meeting place.

Most slopes run parallel and lead down to either Stötentorget or Soltorget.

There are plenty of accommodations in close proximity to the ski system, and you will not need to depend on your car if you choose to come here on vacation.

Those who like to jump off mountain peaks have come to the right place. There are plenty of high points, and the ski resort reaches just above the tree line, where it can be windy at times.

Jocke (Guest)
Note! This text has been translated by Google Translate.
Show original

Despite a strange season 2020/2021, Stöten delivered good snowboarding and a safe trip. I feel that the ski resort stands out a little from the others in Sälen. A little less exploited but all the more genuine mountain feeling, much thanks to the surroundings. Likes that almost all slopes go from the top and down that everyone can go.

Anton (Guest)
Note! This text has been translated by Google Translate.
Show original

Good off-piste, good atmosphere. But Very disappointed with Skipass + it felt most like being cheated.

Paulsson (Guest)
Note! This text has been translated by Google Translate.
Show original

The best system in Sälenfjällen with the best "alpine feeling". Well-integrated system with varying degrees of difficulty on the slopes. Good ski school.

Lundgrens (Guest)
Note! This text has been translated by Google Translate.
Show original

Wonderful week with really nice slopes and nice staff, besides Teddy in the lift. He was fat ugly. :)

The shock has many possibilities, many of which are unfortunately misused or unused. Too many trailer lifts but too few seat lifts and especially then in so-called. the adult area. Sad that the slopes 23 and 24 can only be reached via transport routes from the worldcup hill. In any case during our stay because No. 22 was closed and barred. Stöten prioritises families with children, which we think is good, but we unfortunately forget to make the adult areas attractive, because who is happy to go up and down the few slopes that are reached directly with the chairlift from Stötentorget. It costs to be on top, but it probably costs more to end up in the backwaters due to insufficient investments in lifts and slopes.

Everything was fine we thought 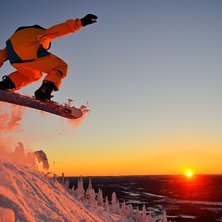 Stöten is open for season.