Kittelmangan
Note! This text has been translated by Google Translate.
Show original

The lie is a must for those who like top trips, steep rides and gutters in spectacular scenery. Choose a ride with care so you get good snow almost every day.

Negative: forget the lifts and helicopters, if you do not want to mess it's not the place for you. Some trips require 2 cars, and others must drive 1.5h from Lyngseidet to get to. As a fan of driving to Lyngen, do you have money take a night / flight and rent a car instead (you have to have a car in Lyngen). Twisted on non-existent nightlife / afterski.

Lyngsalperna is a mountain range / peninsula, 15-20 km wide and 85 km long from north to south with hundreds of mountains over 1000 m. Most of them are protected nature reserves. The area is easily reached by air to Tromsø and further 1.5 hours by car / ferry (www.bjorklid.no). The largest village is Lyngseidet and is located on the eastern side of the peninsula. There are food stores, sports shops (Elektrosport) with sales and some rental of top-speed gadgets. In the village's only afterski (Magic Mountain Lodge) you can also get information, maps, etc. Several accommodation options include Magic Mountain Lodge (room + full board), Johnsengården (apartments) and Sörheim brewery (cabins). A partially outdated but functioning portal with more options can be found at www.lyngenlalp.no. Lyngen Lodge in Kåfjord offers exclusive packages of guided tours, food and boat transport.
Season: A normal season extends from December to May / June. Norrskenet looks best in March. Is it midnight sun-skiing that applies, it's from the end of May. Most people go to Lyngen in March-May. As mentioned here, there is only a small lift so the biggest reason you go here is to go for a hike or hike in unspoiled nature. Lyngen is very popular for guided groups from the alpine lands.
Guides: Jimmy Halvardsson, www.ascentdescent.com, Mikal Nerberg on Lyngenguide and msmg.org offer guided tours in the area. Svenska Mountainguide Travel also offers trips to Lyngen.
Skiing: The best thing about Lyngen is that the mountains are made for cool top trips and offer challenges for medium to extreme. In addition, often with sea views. Considering that you have to go a lot, it's nice to keep in mind that in any case there is more oxygen than 3000 meters in the Alps. The hottest rides are often driven late in the season when the snow is more stable. The Swedish pioneer Åke Hedlund was most in Lyngen summer time. After living in northern Norway a couple of years, I think it seems that the weather is most stable during the month of April / May. Generally, the east side gives more stable weather while the north west side gets a little more snow. Like the Alps, most glaciers are located on the N / O sides. Tip: Varied with views in northern Lyngen as well as Kåfjord (ferry north of Lyngseidet) with a rough ride in the inner parts and around Lyngseidet.
More info: Map, Lyngenhalvöya, Ugland. Book: Trips in Troms, Free Move

Stayed in Tværelvdalen on Northwest Lyngen for 6 days in March this year. This area is absolutely fantastic for those who like towering trips and climbing in serious alpine terrain. The mountains can be quite demanding, and you need some experience and knowledge to stay here for sure. The possibilities for top trips are also amazing and great! You always see the fjord outside when you get up a bit. It may be possible to check the weather information carefully before traveling to Lyngen. The area is quite exposed as it is located on the coast. We had great weather, but just like Karl83 we had a hard time before. Most due to windpacked crowd ...

The heather is definitely worth a visit !!!

Karl83
Note! This text has been translated by Google Translate.
Show original

I was in Lyngsalperne in April this year, it was an experience beyond the usual. High mountains and beautiful fjords and the potential for excellent skiing are available. However, it was cement hard and we made a top ten and then went on. But I will definitely return! 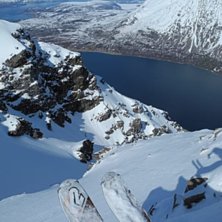