Just a stone’s throw from Riksgränsen in Sweden, and on the Norwegian side of the border, you’ll find Narvikfjellet. Surrounded by blue Atlantic fjords and with pointy mountain peaks, this ski resort offers some of the most amazing views in the world.

With a summit at 882 meters above sea level, Narviksfjellet is one of Norway’s highest mountains. The best time to visit is from mid-March until the end of April, when the north facing side of the mountain is still covered in cold snow while the south side offers slush snow.

There is skiing here for everyone, although only the most experienced skiers will be able to ski all over the mountain. There are large areas for off-piste skiing at Narviksfjellet and you find six lifts, of which one is a large gondola lift here.

If you don’t feel like skiing, then there are excellent hiking options. Norwegian nature is among the most scenic in the world, particularly at Narviksfjellet.
The town of Narvik has several night clubs and restaurants for a nice dinner and a few drinks.

9-days snow forecast from Narvikfjellet
What do you think about Narvikfjellet?
Write a review
5
4
3
2
1
4.5
27 reviews

Good advanced slopes, and dark holes are a fantastic off-piste stretch but Nordic dimensions measured. But the season on the slopes is relatively short. (In fact, think the peak is 1000 m above sea level.)

We were in Narvik at the end of March. It was a bit early in the season. The best time in Narvik is mid / late April or even later. We were lucky, it was snowing about 30 cm. However, both the gondola and the last chair lift were up to the Link closed. But with skins under the skis we went up to Link and got a long and nice ride, all alone and amazing pillows. Narvik is really special, magnificent and spectacular.

Great = D
Three wonderful days with sun! Which place .... Definitely the most beautiful I saw, Norway's impressive mountain and the view down the open water, many pictures became.
The skiing was great, we were almost entirely on the slopes .... You could find pristine areas late in the day (in relation to open times in the lifts;))
Will definitely go there again next year !!!

AndersCederholm69
Note! This text has been translated by Google Translate.
Show original

Extensive expansion of the ski resort on Narviksfjället is planned.
The ambition is to invest SEK 35 million in the next five years.
New project manager Trude Bertnes, who resigned from the job at LKAB Narvik, has high ambitions to develop the plant.
However, a great deal has already happened in the last years. Among other things, Narviksfjället has received new lighting, children's ski slopes and some changes in the structure of the slopes along with a new slider.
Biking in summertime
The further development will include improvements in children's ski area, better signage and pistemap, warehouses and workshop buildings, bicycle bikes, service and cafe construction and a bob course for summertime skiing.
In addition, one of the slopes, the so-called third backing, shall be equipped with lighting and devices for the purpose of securing snow to the slope. Snow screens to keep the snow intact and snow cannons even in that hill can be a solution, according to the future.
Narviksfjället has an impressive fall height of 900 meters. The longest downhill track measures 3,200 meters.
Common lift pass
The back is part of the collaboration between the facilities in Narvik, Riksgränsen, Björkliden and Abisko where a joint lift pass can be solved this year. Narviksfjällen's facility offers particularly spectacular views with the society just below the hill and a classic Norwegian landscape with fjords and fjords in the fund.
The backs also hold a high level of competition and here were determined five World Cup competitions for ladies in the 1990s.

offthepist
Note! This text has been translated by Google Translate.
Show original

So damn wonderful place !!
We were there during Easter this year. The day we arrived, it had not snowed for a long time, but then dumped new pillows every night for the rest of the week.
The place has large areas and if the weather and the snow are good, one can not imagine anything better.
Too bad that the top lifts up to the radio key are not open too often. Down from there, there is so much to go on.
A brutally lovely feeling to be on top with a view of the fjord and with untouched pads and sunshine ..

With good weather and snow, this is the best possible ride in Scandinavia.

Christmas_Inn
Note! This text has been translated by Google Translate.
Show original

There is only one word for Narvik and it is "amazing"! It was just wonderful to go where we were lucky that it was perfect weather, having heard that it might be a little windy. The sun was shining, the sky was blue and the snow was constant. It is truly an experience to go down to fjords. It's a completely sick contrast first frozen water and then it's suddenly fluid. Narvik is one of the most beautiful ski resorts in Scandinavia. I'm already looking back there ...

henrikmjoberg
Note! This text has been translated by Google Translate.
Show original

Narvik has both a high and steep mountain which includes large fields. The skiers who inhabit the mountain are experienced, if not native, as serious with a raid of adventure in the body. Unfortunately, the weather conditions are somewhat uneven like this near the Norwegian coast, and it requires a lot of snow for the ride to be good.

Luckily, there were a lot of conditions before I visited Narvik in April and the sun was shining. It is limited with lightly prepared slopes, but it is also reflected by the clientele at Fjällheisrestauranten, which is much more laid for the more adventurous route. However, the prepared slopes are managed exceptionally. If you are prepared to tear and hesitate, you will be guaranteed pay for the mood, as the ride and the surroundings are spectacular, more beautiful place you can look long after. But even with shorter skiing, you will find easily accessible offpiste around either side of the radio mast. A sense of finding their own lines and favorite parties on the mountain is coming in quickly.

On the north side of the mountain lies Mørholla which is reached after the march to the top 1272 m. H. The area offers difficult off-piste skiing, but when riding on a northern side, avalanche risk should always be considered very high in the area.

Narvik, a very beautiful place!
Skiing is at least spectacular because you look right down the fjord and have Låång views of a massive mountain range from the resort. If you are lucky with the snow and it is a great place for skiing.

Note Go up to the top of the last lift and go down the back. Good ride and even better views from there ....

I live in Narvik and is often there ..
I think there are good trails with drips and strolling in the snow. I recommend that the freeraid guys should be driving from mid February and beyond. The sun is there .. welcome

Todd
Note! This text has been translated by Google Translate.
Show original

Were there one evening v18 2004. The sun was shining and it was incredibly beautiful. Climbing the elevator and taking a ride down the fjord is completely indescribable. The view that meets one with the mountains of lofoten and the fjord that shines in the sunshine can be among the most beautiful to see, absolutely amazing! Must be experienced !!! Unfortunately, snow availability was poor when I was there but it is understood that there is potential within the facility. I will definitely return earlier in the season !!! 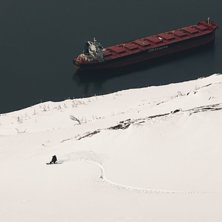 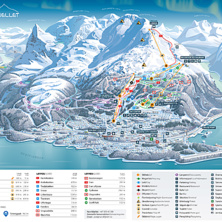