I was in Moiwa week 5-6 2019. Although we did not manage to meet the really big snowfall, it was wonderful to experience the Japanese snow! The snowed six days of nine and the snow was light and fine.
Moiwa is a smaller system on the outskirts of Niseko, with its own lift pass. A lift goes all the way to the top and in addition there are two shorter lifts that go in about the same line, but only a bit up. The fall height is a total of 470 meters. It doesn't sound that much, but when it is regularly replenished with new, fluffy snow, not much more is needed. The trail area is also considerably larger than what the piste map shows and there are plenty of different lines to choose from. In a way, Moiwa resembles Osthang in Ramundberget, with a lift that provides large areas to ride on. Here, however, we have 170 meters higher fall height and, above all, much more regular and abundant snowfall.
The congestion is considerably smaller than in adjacent Niseko, but even in Moiwa it can unfortunately be traced relatively quickly.
The Lodge Moiwa 834 offers good, convenient and affordable accommodation in relatively spacious canister rooms just below the slopes.
What makes me not put the last star is that excessively anxious lift caretakers closed all lifts except the lowest and completely uninteresting the last two days when it blew about ten meters. Even in the rest of Niseko, only the lowest lifts were open, while nearby Rusutsu and Kiroro had virtually everything open despite the winds. 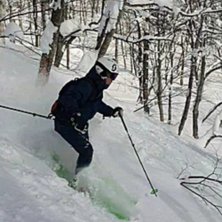 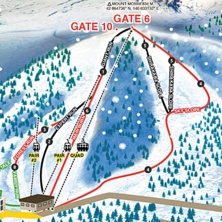