In the 1950s, Norman and Dorie Sarns were looking to replace the ski hill they built for family and friends to enjoy. They selected the location of Nubs Nob Ski Area and opened the winter venue in 1958. Since then, the resort that shares Norman's nickname has grown into a winter destination for skiers and riders in the northern portions of Michigan.

Located near Harbor Springs, long-distance motorists will use Interstate 75 to get into the region. Also, US Routes 31 and 131 will come in handy before transferring to local roadways. Those traveling down from Ontario, Canada, will not have a long drive from the border. Fliers will likely use Detroit Metropolitan Wayne County or Grand Rapid's Gerald R. Ford International airports.

Nub's Nob and Beyond

One of the attractive features of the Nubs Nob Ski Area is the number of things one can do when not at the resort. Families can enjoy ice skating and snow tubing just down the road. Those looking to ride snowmobiles or do a bit of snowshoeing also have nearby options. That leaves the downhill slopes for skiers and snowboarders or the Nordic trails for those who like to cross country ski.

The family-owned Nubs Nob Ski Area has basic amenities available at the base lodge. A shop provides outdoor gear and souvenirs, with rentals and tune-ups available as well. There is a child's daycare for families with future ski bums that are not quite ready for the pow. There are no on-mountain lodging facilities, but accommodations down the road include ski in-out condos from Land Masters and Trout Creek that shuttles guests to the ski area.

The Nubs Nob Ski Area offers private ski and snowboard lessons ranging from one to three hours in length. There are also three racing team programs available at Nub's Nob. The JART team involves U12 and U14 age brackets, and there are also Sports and Competition teams available for park rats. Family members between 7 and 14 can join the venue's Academy to gain the fundamentals they need if classes are not sufficient.

Nub's Has it Covered

The Nubs Nob Ski Area gets about 123 inches of annual snowfall on average, and snowmaking equipment supplements that across roughly 240 acres of terrain. A base height of 911 feet and a summit at 1,338 feet produces a vertical drop of 427 feet. Skiers and riders at the Nubs Nob Ski Area have over 50 runs to choose from, with several equipped for night skiing.

A third of the terrain is rated green for newbies to explore, while around 44-percent of the mountain is rated blue for intermediate skill levels. The remaining trails at the Nubs Nob Ski Area have black diamond ratings that challenge advanced skill sets. Cross country, snowshoeing, and uphill trails are also marked and have different ratings to challenge all skill levels.

Nine lifts, five of which have lighting, move guests around the Nubs Nob Ski Area. These include a double, four triples, three quads, and a surface lift. 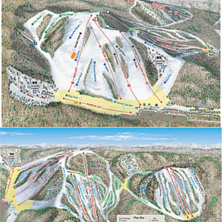